The seventeenth man elected to the presidency of ACPA was Ralph F. Berdie. He was announced as president-elect at the ACPA luncheon 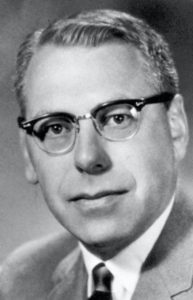 on Monday, March 23, 1964 in the Peacock Court of Hotel Mark Hopkins in San Francisco. Berdie was Professor of Psychology and Director of the Student Counseling Bureau at the University of Minnesota. He was 47 years of age, married, and the father of three children.

Ralph Berdie was born in Chicago. Originally from Minnesota, the family returned there with Ralph who entered Duluth Central High school in 1932 and graduated two years later. In the fall of 1934, Berdie enrolled at Duluth Junior College for two years then he transferred to the University of Minnesota (UM). He majored in psychology and received the B.A. Degree in 1938. D. G. Paterson was Berdie’s adviser for the M.A. and Ph.D. degrees, which he was granted in 1939 and 1942, respectively. During his study for the master’s, Berdie was a Psychology Teaching Assistant. He was an Administrative Fellow with the Testing Bureau during 1940-41 and Assistant to the director in the Testing Bureau during 1941-43.

Ralph Berdie made a study in 1940-41 of personnel work as reported in the annual ACPA Proceedings, when he was Administrative Assistant in the Univer­sity Testing Bureau at the University of Minnesota. During the Chicago convention in 1951, Berdie was a symposium participant at the Thursday, March 29 general session at which time Current Research in Student Personnel Work was discussed. At the 1952 ACPA convention in Los Angeles on Monday, March 31, Berdie was one of three discussants at a sympo­sium titled How to Design Research to Investigate Student Personnel Problems.

During 1952-53, Ralph Berdie chaired the ACPA Research Committee, and he was one of nine members on the Special Commit­tee to Consider Matters of Interest to Clinical Counselors. At the Chi­cago convention in 1953, he read a paper at 10:30 a.m. Tuesday, March 31 section meet­ing, when the general subject New Frontiers in Personnel Research was discussed.

Early in 1954, the expected publication of Berdie’s After High School, What? was reported by the University of Minnesota Press. At the Buffalo convention in 1954, he read a paper at a section meeting on Wednesday morning, April 14. The general subject of five discussants at that 10:30 a.m. meeting was Pre-College Counseling.

Early in 1955, an announcement was made that Berdie and a colleague at the University of Minnesota Student Counseling Bureau were directing the devel­opment of a new personality inventory for grades 9 through 12. At the Conrad Hilton Hotel in Chicago on Monday afternoon, April 4, 1955, during the annual convention, Berdie presided at a 3:00 p.m. section meeting titled “Selecting a Test Battery for Choosing a Field of Academic Concentration.”

In the 1956 election, Berdie was chosen a member-at-large to the ACPA Executive Council for a one-year term. He was one of four participants in a Tuesday morning, April 1, ACPA session at the St. Louis convention in 1958. The general subject was Evalu­ation of: (1) California Psychological Inventory and (2) Minnesota Counseling Inventory.

Berdie served on the 30-member ACPA Program Committee during 1958-59. On Monday night, March 23 from 8:00-9:20 at the 1959 convention in Cleve­land, he was one of four people who made presenta­tions at the College Choice and Student Achievement program.

When the 1962 election results were reported at the ACPA Executive Council meeting on Saturday, April, 1962 in Chicago, Ralph F. Berdie was announced as one of the new Executive Council members-at-large for a two-year term, expiring May 1, 1964. On Tuesday afternoon, April 17, he was one of several persons who presented at a session titled “Similarity of College Counselor-Counselee Personality Characteristics—A Research Report.” He attended the Thursday morning, April 19 Executive Council meeting for new ACPA officers and Executive Committee members, but he left the meeting soon enough to participate in the late morning program on Recruitment and Selection for the Peace Corps.

Berdie attended the ACPA Executive Council meet­ing on Sunday morning, April 7, at the Boston Conven­tion. He was one of the four ad hoc committee mem­bers who presented a statement to the Executive Council relative to the need for an Executive Secre­tary, whose major duties and responsibilities in APGA would be concerned with higher education services. ACPA membership as of May 31, 1964 was 3,780.

At the San Francisco convention in 1964, the year he became president-elect, Berdie was present as a member-at-large to the two day-long Executive Coun­cil meetings on Saturday and Sunday, March 21-22, preceding the convention, and he attended the annual luncheon and the Business session on Monday. At the Saturday morning Executive Council meeting, his motion that those present endorse a resolution about Dennis L. Trueblood for presentation to the member­ship was seconded and passed. On Monday night, in the Terrace Room of the Fairmont Hotel, Berdie was one of three panelists who spoke on the general topic on Controversial Issues in Testing Today.

At the Minneapolis convention in 1965, President­-elect Ralph F. Berdie attended all three Executive Council meetings, the annual Luncheon, and the Business session. At the Executive Council meeting on Saturday, April 10, Berdie reported that ACPA’s annual budget was approximately $20,000, with the Journal and COSPA representing respectively, the first and second major expense. Then he reported on the APGA Executive Council meetings conducted during the previous day and a half, including discus­sion of the vacancy created by the resignation of the director of higher education services. Near the close of the Saturday meeting, Berdie’s motion that Commis­sion XII prepare a statement for the Executive Council regarding ACPA’s basic position on professional prepa­ration was seconded and passed. At the annual Lunch­eon on Monday, Berdie presided and welcomed the gathering of over 550 people. Among those introduced were ACPA past presidents who were in attendance.

Berdie presided at the ACPA Executive Council meeting on Thursday, April 15, at which time the affiliate status of ACPA with the American Association for the Advancement of Science was withdrawn. During that meeting, he announced most of the committee appointments for 1965-66. ACPA delegates to the APGA Senate included the five officers, nine members-at-large on the Executive Council, and 21 other AGFA members. Others with whom President Berdie served during his presidential year were members of the 14 Commissions and eight Committees. On May 31, 1965, the ACPA membership totaled 4,683.

During 1965-66, ACPA became a founding member of the National Council on School-College Relations (NCSCR). Seven ACPA monographs were in print. Berdie was present at the October 1965 meeting of COSPA in Washington, DC. In November 1965, Presi­dent Berdie attended the APGA Executive Council meetings at the Washington Hilton Hotel, ACPA head­quarters hotel during their thirty-ninth annual con­vention. ACPA membership as of March 1966 was 5,445.

The Washington, DC national conference, which was ACPA’s fourteenth as a Division of APGA, met Monday through Thursday, April 4-7, 1966. A total of 28 business and committee meetings and 52 content programs were scheduled. President Berdie presided at the two all-day ACPA Executive Council meetings on April 2-3 (prior to the convention program) and the Business session on Monday afternoon. Approximately 230 persons attended the Business session.

At the annual Luncheon on Monday, Ralph F. Berdie delivered his presidential address titled “Stu­dent Personnel Work—Definition and Redefinition” before some 600 persons.

Well known for his research and publication in higher education and counseling psychology, he au­thored, edited, or contributed to more than 250 jour­nal articles and books. He served as president of APGA during 1970-71.

Three months before his death, Ralph Berdie wrote to say that the most significant things he did as president were toward maintaining ACPA within APGA.

When he died suddenly in August 1974 at his home in St. Paul, Ralph F. Berdie was 58 years old. He was survived by his wife, Frances, two sons and a daugh­ter, his mother, and his younger brother.

At the mid-year ACPA Executive Council meeting In 1974, a memorial resolution in his honor was ap­proved and the “Editor’s Page” of the January 1975 issue of the Journal of College Student Personnel recognized him for his many professional accomplish­ments.