Merril C. Beyerl’s election to ACPA’s highest office early in 1972 marked the twenty-fourth time that a man was selected. The announcement 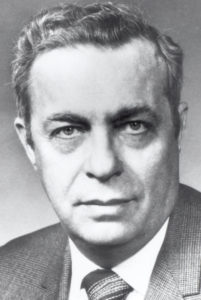 of Beyerl’s nomination as one of two presidential candidates was made by Past-president Bloland, the ACPA Nomina­tions and Elections Committee chair. Bloland re­ported at the mid-year Executive Council meeting in St. Louis on Friday night, October 1, 1971, just before adjournment at 11:30 p.m. Beyerl was Vice President for Student Affairs, Dean of Students, and Professor of Psychology at Ball State University (Muncie). He was 50 years old, married to the former Eunice Ledger, and father of three children, Cynthia, Todd, and Gregory.

Merril Beyerl was born in Malone, a small town in upstate New York. He completed some undergraduate study at Franklin Academy in his hometown, at Muhlenberg College in Allentown, Pennsylvania, and Plattsburg (New York) State Teachers College. In 1942 he enlisted in the U.S. Marine Corps Reserve and was discharged a Captain in 1946. Beyerl received the B.S. degree at Plattsburg State, (1946, Social Science and Education) and his M.S. at Syracuse University (1948, Coun­seling and Guidance). With state certification he be­came a School Counselor and Director of Guidance. At the high school in Muhlenberg (PA), Beyerl taught social studies, 1946-48. At Syracuse Univer­sity during 1949-51, he was an Instructor of human growth and development and studied for his Ph.D. degree (1951, Clinical and Counseling Psychology). During 1951-53 he was an Assistant Professor of Psychology and Counseling at the University of Illi­nois.

Beyerl then moved to Ball State University where he was employed during the next 35 years until his retirement, 1953-88. He accepted an appointment as Assistant Professor of Psychology and Guidance and a Counselor, 1953-55, Associate Professor then Profes­sor of Education and Psychology. He became Director of the Counselor and Psychological Services Center at Ball State, 1957-62. In the summer of 1964 he ac­cepted an additional title and responsibility, Vice President for Student Affairs, which he held until his retirement.

At the 1967 Dallas convention, Beyerl was discuss­ant on the Tuesday afternoon, March 21 ACPA pro­gram titled “Who Should Educate the College Student Personnel Worker and to What End?”—Dialogue. He represented NASPA during merger discussions with ACPA and NAWDC during 1969-70. He was appointed to the five-member special ad hoc ACPA Committee on the Role of Women in the Profes­sion, formed and funded by ACPA Executive Council action taken at the mid-year meeting in St. Louis on Sunday afternoon, November 9, 1969. The committee report was presented and then the committee was discharged at the Sunday afternoon, March 15, 1970 Executive Council meeting during the ACPA conference in St. Louis.

Following his election in 1972 as president-elect, Beyerl was present at the ACPA Executive Council meetings on Saturday and Sunday, March 25-26, and the annual Business session on Monday afternoon at the Conrad Hilton Hotel during the 1972 Chicago convention. As president-elect, he participated in the Executive Council meeting for 1972-73 ACPA officials on Wednesday afternoon, March 29. His concern about each member of ACPA being given an opportu­nity for an affiliate membership on one of the 14 Commissions was reported to the Coordinator of Commissions to present to the Commission chairmen for their response prior to the October Executive council meeting. He was one of two presenters at a Tuesday morning, March 28 program labeled Student Opinion Polls—A Technique for Improving Communi­cation.

On Tuesday and Wednesday, May 9-10 in Chicago, Beyerl joined the ACPA past-president and president in a meeting with representatives of NASPA and NAWDC for an inter-associational meeting. Late in May, he and the ACPA president met in Cleveland with ACPA and NAWDC convention planners.

Merril C. Beyerl was present at the mid-year meet­ings of the ACPA Executive Council held Thursday through Saturday, October 5-7, 1972 at the Statler Hilton Hotel in Cleveland. On Thursday night, ACPA was incorporated as a non-profit organization. A re­port was made that Beyerl planned to attend the APGA regional conventions in San Diego and Atlanta in 1973. At the Friday afternoon meeting, President-elect Beyerl introduced for further discussion the Commis­sion membership question carried over from the March 29 Executive Council meeting in Chicago. He was present in the Sheraton Cleveland Hotel on Saturday, when the Executive Council of ACPA, NASPA, and NAWDC met jointly.

At the Tuesday night meeting, Beyerl reported on the APGA Board and Senate meeting held in San Diego. The Executive Council went into executive session to hear Beyerl’s planned presentation at the Business session on Thursday regarding future rela­tions with NASPA and NAWDC. Three motions intro­duced by President-elect Beyerl and passed by the Executive council included the following: (1) that a single national association of ACPA, NASPC, and NAWDC was not feasible at the time, (2) that ACPA would continue to cooperate with appropriate profes­sional organizations in different ventures, and (3) that ACPA would continue to cooperate with NASPA and NAWDC in holding the joint 1974 convention in Chi­cago. These three motions were approved also at the Business session on Thursday afternoon. In addition, his motion that the ACPA Executive Council conduct an official vote of the total membership on disassociation from APGA was approved.

President Beyerl’s proposed budget of $80,700 for 1973-74 was approved at the Executive Council meeting on Saturday afternoon, April 7, 1973. His plan and procedures for the operation of Blue Ribbon Panel to prepare pro and con position statements on affiliation/disaffiliation with APGA were adopted by the Executive council.

In August 1973, President Beyerl, the president-­elect, and the ACPA treasurer visited APGA headquar­ters in Washington, DC. In the meantime, Beyerl and the president-elect searched for a convention site for 1975. In his reports to the members in the July and November issues of the Journal, the president alerted the ACPA membership about the upcoming proposals of the Blue Ribbon Panel.

President Beyerl presided at the ACPA Executive Council meetings held Thursday night and Friday, October 25-26, 1973 in Chicago. Among the many actions taken by the Executive council members, they considered the plan for the membership vote relative to the APGA affiliation issue introduced by Beyerl. After the October Executive Council meetings, Beyerl prepared and mailed a Presidential Communiqué to ACPA members to bring them up to date on actions taken in Chicago. The Blue Ribbon Panel position papers and ballot were mailed to each ACPA member late in 1973.

In February 1974, ACPA President Beyerl told Guidepost: “I am pleased that the issue of affiliation or inde­pendence has been decided definitely by the ACPA membership. I hope that our energies can now be directed to better communication with APGA and cooperation in other matters of professional concern.” He announced the spring Presidential Communiqué the unofficial results of the membership vote to con­tinue affiliation with APGA.

The forty-seventh national ACPA convention was held in Chicago in 1974, concurrently with NASPA and the National Association for Women Deans, Adminis­trators, and Counselors (NAWDAC, formerly NAWDC). Programs were held Sunday through Wednesday, April 14-17. The ACPA theme was “Credibility Reaf­firmed: Ethics, Legalities, Values.” ACPA headquar­ters was the Conrad Hilton Hotel, where the programs were scheduled and the official meetings were held. The ACPA, NASPA, and NAWDAC programs were combined in one booklet, and the placement service was sponsored jointly. The joint convention celebrated the 50th anniversary since members of ACPA’s first predecessor organization met at Chicago in 1924 at the invitation of the NADW. According to reports, 1,883 ACPA members registered at the 1974 conven­tion. ACPA state divisions were created again by action of the Executive Council. ACPA income for 1973-74 ($6,599.66) was exceeded by expenditures in the amount of $775.23.

When he was immediate past-president, Beyerl continued to serve as ACPA’s representative to the APGA Board of Directors. At the 1975 national con­vention in Atlanta during the Executive Council meeting on March 4, 1975, that group voted to continue his representation to APGA. In the fall of 1975 he testified before the O’Hare Committee in Washington, DC concerning the Higher Education Amendments Act.

For the next 11 years, 1979-89, each succeeding ACPA president appointed him Coordinator of the Government Relations and Licensure Committee. At several national conventions during those years, Beyerl presented workshops/programs related to his spe­cialty assignments. Throughout the 1980s he was appointed to other ACPA committees including: ad hoc Investment Committee (1983-84), ad hoc Public Relations (1984-86), and External Relations and ACPA/ NASPA Government Relations (1985-86). Invited to contribute to “A Time to Speak” column In ACPA Developments, he wrote about future directions of student affairs for the November 1986 issue.

Upon completion of his ACPA representation on the APGA Board, he received the Professional Service Award at the Luncheon during the 1979 ACPA na­tional convention in Los Angeles. During the 1981 convention at Cincinnati, he was chosen a Senior to attend the annual Annuit Coeptis dinner in honor of selected new professionals. At the national convention in Miami (1988), a resolution cited him for his long and distinguished career and his involvement with ACPA. A former president of the Indiana College Personnel Association, Beyerl has been a member of Commis­sion II, Admissions and Orientation, Commission VII, Counseling and Psychological Services, and Commis­sion IX, Assessment for Student Development.

Merril Beyerl resided In Muncie, Indiana. He died on November 11, 1992. A Memorial Resolution in his honor appeared in the June 1993 issue of ACPA Developments. In 1996 the Jack Beyerl Student Affairs Lecture was established by Ball State’s division of student affairs in recognition of Jack’s service as vice president of student affairs and dean of students from 1964 until his retirement in 1988. A distinguished speaker in the field of student development or higher education is invited to speak on campus each year in his honor.