Margaret Cameron was elected NAAS president at the annual Business session in Cincinnati on Friday, February 27, 1925, for a one-year 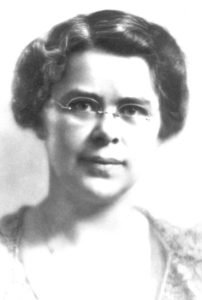 term. At Washington, D.C. in February 1926, she was re-elected for another year.

Born in Traverse City, Michigan, Margaret Cameron graduated from Central Lake High School and enrolled at Central Michigan Normal School (now University) during 1905-07, where she earned a life teaching certificate. From 1907-11, she was Teacher and high school Principal at Clare, East Jordan, and Alma, Michigan. She attended the University of Michi­gan (UM) during 1911-13 where she completed the B.A. degree (1913, History and English). Between 1913 and 1927 she was Secretary of the School of Education and directed the Bureau of Appointments at UM.

At the suggestion of Professor Whitney, Head of the Department of Education, she attended the NADW conference in Chicago in 1924. She said that her “excuse” for going was to attend the sessions of the appointment secretaries and to meet Mrs. Cheney. The personal relationship which began, she said, made her trip very worthwhile. At the 1924 confer­ence, Margaret Cameron took an active part during planned discussions. One of the topics of her remarks was a description of the experiment of establishing a placement bureau under the auspices of the Michi­gan State Teachers’ Association. She served NAAS as vice-president during 1924-25.

The new Willard Hotel was NAAS conference headquarters at the 1926 annual gathering in Washington, D.C. on Tuesday and Wednesday, February 23-24. As during the two previous years, the meet­ings of the third annual conference were held at the same time as the NADW group and during the week of the mid-winter meeting of the Department of Superintendence of NEA. Forty-two members repre­senting 36 institutions registered at the headquar­ters desk, almost double the number of members who attended the Cincinnati meetings the year before.

The first session was held Tuesday afternoon, February 23 in the new Willard Hotel with Cameron presiding. The topic of her first speech was “What a Superintendent Would Like of an Appointment Bureau.” The subject of the other paper was the work and selection of appointment secretaries. A discus­sion of suggestions made by the speakers concluded the meeting.

The next session was a joint meeting with the NADW group at the Wardman Park Hotel, conducted Wednesday morning. R.G. Reynolds, who ar­ranged a program of speakers from Colum­bia University, was chairman. Titles of the speeches presented were “Research Stud­ies Which Have Been Made in the Field of Appointment,” and “Placement Problems as an Aspect of Educa­tional Personnel Administration.”

The annual Busi­ness session of the association was held Wednesday afternoon in the NAAS headquarters hotel. Thirty members were present, and Cameron presided. She reported that in response to a letter she wrote to S. D. Shankland, Executive Secretary of NEA, he informed her that NAAS did not yet meet the requirements for affiliation.

Discussion turned to desirable programs for the annual meeting that would satisfy the needs and interests of both those whose work involved teacher placement and those who were doing placement work in fields other than teaching. Section meetings were suggested.

Relative to the subject of membership dues, a decision was made to establish an institutional membership fee of $5.00 and retain the individual membership of $2.00.

Near the close of the Business session the report of the Nominating Committee (appointed earlier in the day) recommended that the same officers be requested to serve another year. The members voted to accept the report and the secretary was asked to cast a unanimous ballot for those named.

Cameron chaired the Program Committee which planned the fourth annual meeting held at Hotel Pennsylvania in New York City on Thursday through Saturday, January 20-22, 1927. During the year before the conference, President Cameron appointed a Committee on Statistics, and she named six mem­bers to a Policy Committee to help arrange sectional meetings. The joint conference was sponsored by NAAS, the National Committee of Bureaus of Occupations (NCBO), and the Personnel Research Federa­tion (PRF). The format of the joint conference included four general topics: Mental Hygiene, Employment Tests, the Personal Interview, and Placing College Graduates in Business. In addition, NAAS planned two sessions on Teacher Placement.

The first NAAS session was chaired by Cameron on Thursday morning, January 20. She explained the general nature of the program schedule which con­tained sectional meetings for different interest groups at the same hour. Then the major address titled “The Human Side of Placement Work” was presented. A show of hands indicated the presence of 27 people at that session.

After the presentation of a paper titled “The Adequate Handling of the Active List” at the second NAAS session held on Friday morning, January 21, a discussion of procedures connected with registration and placement developed. Cameron said that she announced the time for registration in the published daily bulletin at the University of Michigan, secured about 75 percent of her registrations within the allotted time, and charged a late fee of $1.00.

After the presentation of two more papers, the general discussion focused on problems involved in collecting, interpreting, and distributing data about registration. President Cameron mentioned that she gave all the information she had about the candidate to the employer who was interested in hiring the person. She said that superintendents in Michigan preferred this policy and objected to other bureaus that did not give them complete information.

Cameron presided at the annual Business ses­sion on Saturday morning, January 22. When the secretary called the roll, members answered by de­scribing techniques or innovations which were helpful to them in their placement work. When her turn came, Margaret Cameron talked about the use of an interview card in her conferences with registrants. A total of 23 names were called and 18 responded with descriptions. The NAAS membership list as of Janu­ary 1927 indicated 108 names.

Cameron wrote in October 1939, about a discus­sion she had at the Washington, B.C., conference in 1926: “I remember distinctly discussing our work with a group of appointment secretaries and saying that it was the most interesting work in the world and that I wouldn’t think of leaving it for any other; but the next spring I had done just that, and so my connec­tion with the association ended.”

During the summer of 1927 following her NAAS presidency, Margaret Cameron traveled abroad to visit in England, Wales, Scotland, Holland, Belgium, France, Switzerland, Germany, and Italy. That fall she became Secretary to UM President Clarence Cook Little for two years (1927-29). She was Secretary to the Secretary General of the 6th International Con­gress of Genetics during 1930-32. From 1933 until her retirement in 1952, she was Head of General Circulation in the University of Chicago Harper Library.

Margaret Cameron died on January 4, 1977 at the age of 91, while living in Florida. At the ACPA Executive Council meeting on March 27, 1977, during the national convention in Denver, President Anne Pruitt was asked to pay tribute to Margaret Cameron at the Luncheon two days later. An “In Memoriam” article appeared in the May issue of ACPA Developments that year.