Family financial problems caused Mrs. May L. Cheney to organize a commercial teacher placement office in San Francisco in 1886 when 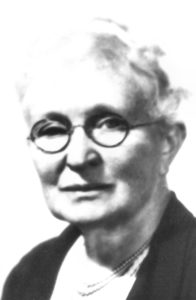 she was 24 years old. Up through 1897 her business became au­thoritative and profitable, but she was not satisfied with her registry. She decided that the University of California, Berkeley (UCB), her alma mater, owed some obligation to the graduates unable to find proper positions. The English universities had ap­pointment secretaries. Harvard University had a similar official. UCB, she thought, should likewise give such a service to students. After she convinced UCB President Martin Kellogg, who suggested that she convince also a certain regent, her plan was accepted. She opened the UCB placement service in the president’s office in South Hall on January 1, 1898, with a salary of about one-third of what she had made with her private agency in San Francisco.

Born during the Civil War in Garden Grove, Iowa, May Lucretia Shepard was named after the month in which she was born and her maternal grandmother, who influenced her childhood. May Cheney’s early school attendance was in her hometown. She at­tended high schools in Oakland and Chico, Califor­nia, and enrolled at UCB in 1879. Near the end of April during her senior year, she married Warren Cheney. The Bachelor of Letters degree was granted to her in December 1883. She and her husband had a house built close to UCB, on College Avenue, after she was hired to be the Secretary of Martin Kellogg.

Until the time of World War I, she undertook to provide all kinds of positions for graduates in all fields. The work grew to such proportions that the general employment work was turned over to the alumni association’s Bureau of Occupations and Mrs. Cheney and her staff concerned themselves exclusively with job placements for graduated teach­ers. Similarly, where she once sent her “children” to teach in elementary and secondary schools, she then was able to provide posts in institutions of higher learning for hundreds of her applicants.

May L. Cheney was one of several teacher place­ment secretaries who met in February 1923 for a very interesting conference as guests of the NADW in Cleveland. The deans of women were meeting prior to the annual convention of the Department of Superin­tendence of NEA.

Several months after she returned to Berkeley at the close of the Cleveland meetings, Cheney tempo­rarily chaired an organizational meeting of the West­ern Association of Appointment Secretaries (WAAS) in Riverside, California. WAAS was formed on Tuesday, October 16, 1923. Cheney and the temporary secretary formed a committee to draft a constitution with power to adopt.

Elected president of WAAS in 1923 prior to her presidency of the National Association of Appointment Secretar­ies (NAAS), she was re-elected several times and served the regional group for 15 consecutive years until several months after her retirement in 1938 from UCB. The WAAS group met sometimes bi-annually and other times annually in California cities.

Under the direction of Helen Wright, Director of the Smith College Appointment Bureau, another national meeting of appointment secretaries took place in 1924 at the annual educator’s convention in Chicago. Twelve appointment officers (eleven women and one man) met during the annual conventions again as guests of NADW to discuss mutual concerns, determine the nature of the new organization, draft a constitution, and elect officers. Nine people joined NAAS in Chicago and paid their 1924-25 dues of $2.00 each. Cheney, with over 26 years of appoint­ment secretary experience at UCB, was elected presi­dent of NAAS organized near the end of February

1924. She was the mother of three grown and distin­guished sons, and the widow of Warren Cheney, an author and real estate dealer who died about three years earlier. Cheney’s election was reported in a local newspaper after she and her friend, Margaret Murdock, returned to Berkeley from Chicago on Wednesday, March 5.

According to the constitution adopted at Cleve­land in 1924, the purpose of NAAS was to promote and develop the work of the appointment offices throughout the United States, emphasizing coopera­tion, research and service. To help in the accomplish­ment of these purposes, two committees were formed: Research and Publicity, chaired by R.G. Reynolds, Director, Bureau of Education Service at Teachers’ College, Columbia (TC); and By-Laws and Affiliation, chaired by Elizabeth B. Snell, Appointment Secretary at Stanford University.

Cheney, reportedly the first woman in this coun­try to begin a college appointment service, made every effort to put NAAS plans before the people engaged in appointment secretary work. She left Berkeley on Sunday, February 1, 1925, to go back East to inspect the offices of appointment secretaries in the educa­tion departments of the Universities of Michigan, Columbia, New York, Chicago, and Antioch College. This lady, who said that she was never able to indulge herself in the luxury of quarrelling with people, then planned to attend the first annual NAAS conference in Cincinnati near the close of the annual educational conventions. As during 1923 and 1924, the NAAS group were guests of the NADW members who con­cluded their sessions on Friday and Saturday, Febru­ary 27-28.

Twenty-two members representing 19 institu­tions were present at the NAAS meetings in Cincin­nati. Meetings opened Thursday morning, February 26, 1925, with an address by Robert Josselyn Le­onard, Director, School of Education at TC, who was the first formal speaker to address NAAS. His topic was “Appointment Service for Teachers—Progress and Problems,” and his address was published in the first annual NAAS report. Some years later, Cheney wrote that he “preached the gospel of placement” as she believed in it. The lady, who argued that the best teachers were those who had children of their own, appointed a Nominating Committee on opening day at the conference. Lynda Sargent, Personnel Director of the American Council on Education (ACE), Wash­ington, D.C., gave a short report of the work of her organization and a discussion followed relating to opportunities of cooperation between her group and NAAS.

President Cheney chaired the annual Business session held Friday, February 27, 1925, at Hotel Gibson. Among the business matters brought up for the discussion, the new NAAS group debated the nature of meetings to be held in the future. Professor Jordan Cavan of the Committee on Appointments at Rockford College in Illinois brought up the subject. The question was asked if annual meetings should be similar to NEA summer meetings in which general discussions of educational matters were conducted, or should the new group follow the policy of the American Medical Association which had experts to present addresses? Should the association program consist of joint meetings with NADW or NVGA? NAAS membership during the charter year to February 28, 1925 was 79.

Nearly fourteen years later, Margaret Cameron, the second NAAS president, commented about May Cheney: “She was certainly an example and inspira­tion to us all and she gave the Association a very splendid start.” The woman who believed that the teachers were either growing or dying was conferred an honorary ACPA life membership after her retire­ment from UCB in recognition of her important contributions to the professional development of student personnel work in its early history.

Following her presidency of NAAS, May Cheney attended and participated in the annual meetings. For example, President Jack Walters appointed her to the Program Committee in preparation for the con­vention at Minneapolis in 1933.

At the age of 76 after 40 years on the job as UCB’s Appointment Secretary, May L. Cheney retired and left her suite of offices in Haviland Hall. After directing almost a lifetime of service, over 50 years to the young people of California, she announced with consider­able pride that her official family numbered some 20,000. For nearly 40 years she lived within a short walk from her office at UCB.

May L. Cheney died in Berkeley, about four months after the attack on Pearl Harbor at which time the United States entered World War I. She was 79 years old. Three sons and their families survived her.