ACPA’s 46th chief executive was Dennis C. Roberts the 30th man to serve in the role of president. The 1984 election results were reported at 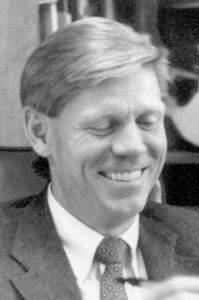 the national convention in Baltimore that year and in the post-convention issue of the newsletter. Among the young­est men when elected, he was 35 years old.

Born in Prescott, Arizona, his family moved to Boulder, Colorado, when Dennis was two years of age, and lived in Boulder until he graduated from high school. Roberts earned his B.A. (1971) and M.A (1973) education degrees at Colorado State Univer­sity, Fort Collins (CSU), in the subject areas of Music Education and Student Personnel Administration, respectively. While completing his master’s, Roberts served in positions of Assistant Director then Associ­ate Director of Preview CSU (Orientation Program), Assistant Head Resident and then Head Resident in Residence Halls. After receiving his master’s, he took his first professional position at the University of Maryland at College Park.

While at Maryland, he served first as Assistant Director (1973-74), Director of Orientation (1974-76), and as Assistant Director of Campus Activities (1976-79), when he launched the University of Maryland leadership program. Meanwhile, he studied for his Ph.D. degree in College Student Personnel Administration granted by the University of Maryland in 1979. The title of his dissertation was “Developmental Maturity as a Predictor of Lead­ership Effectiveness.”

After receiving his Ph.D., Roberts moved to Dallas, Texas, and Southern Methodist University (SMU) where he accepted an appointment as Director of Residence Life and Leadership Programs in 1979. Later he moved to Associate Dean of Student Life/Director of Residence Life and Leadership Pro­grams (1982-88) at SMU, the position he held while serving as President of ACPA.

After Roberts left SMU, he became Dean of Student Affairs at Lynchburg College in Virginia from 1988 to 1994. Because of his passion and expertise in leadership programs, Roberts was invited to join Miami University in Ohio in 1994 as Assistant Vice President for Student Affairs and was later promoted to Associate Vice President through 2007. Roberts served as an adjunct professor in the masters program of College Student Personnel, teaching the introduction to student personnel work and the supervised practice seminar throughout his years at Miami.

Qatar Foundation hired Roberts in 2007 to serve in a one-of-a-kind role as Assistant Vice President for Faculty and Student Services where he coordinates a variety of student affairs programs and services and works with governance and coordination of Qatar Foundation’s higher education partners based in Doha, Qatar. The six partner institutions include Cornell University, Virginia Commonwealth University, Texas A&M, Carnegie Mellon University, Georgetown University, and Northwestern University. Partnering with these institutions in the historic and geographic setting of the Arabian Gulf provides a unique opportunity to launch capacity building programs that benefit Arab, Asian, African, and other students throughout the world in ways reflecting the best higher education has to offer.

Roberts became an active member of ACPA In 1973 at the age of 25. He made presentations at every ACPA national convention from 1976 through 2009 missing only 1999. Topics addressed include alcohol and other drug abuse prevention, professional commitment/involve­ment, organizational behavior, student development, history of student personnel work, and leader­ship programs.

Roberts has served ACPA in a variety of leadership positions since 1976. He Joined Commission IV (Students, Their Activities, Their Community) and chaired the commis­sion’s Leadership Devel­opment Task Force during 1976-80. His volunteer leadership of the task force led to (1) investigating the degree and quality of leader­ship program offerings on a national level, (2) summarizing results of the study, (3) providing a clearinghouse of information and models of leadership programs, (4) conducting regional and national convention work­shops, and (5) publishing a model for leadership pro­gramming as a result of the task force study (Student Leadership Programs in Higher Education, 1981). During 1977-80, he was a Directorate Body member of Commission IV. Subsequently, he chaired that com­mission during 1980-82. He increased membership and participation during his term of leadership and completed a comprehensive evaluation of the commis­sion and its services. He reported quarterly to the commission’s membership in their newsletter, Inter­change.

In addition to his Commission IV activities, he was a member of the Quality of Life (past Tomorrow’s Higher Education) planning project, an ad hoc com­mittee member and drafter of a joint statement on the relationship between commissions and state divisions, and initiator and planner for better inter-association collaboration among student-activities related asso­ciations.

A candidate for Vice President of Commissions (1982-84), he won the election, and during the 1982 national convention in Detroit, at an Executive Coun­cil meeting on March 20, he reported that he would emphasize that commissions develop and strengthen relationships with other associations in networking and other collaborative ways. His column on commis­sion activities appeared regularly for the next two years in ACPA Developments, during which time he directed the planning and activities of the ACPA commissions, represented their interests to the broader Executive Council, managed all their budgets, and served as a conduit of information both to and from commissions. At the October 1982 mid-year Execu­tive Council meeting near Indianapolis, he reported that a majority of the commissions were involved in the design process of the Council for the Advancement of Standards for Student Services/Development Pro­grams (CAS). Upon his request, the Executive Council voted to change the name of Commission VIII from “Student Health” to “Wellness,” termed essential to rebuild that commission.

In 1983, he was appointed to the Inter-associa­tion Task Force on Alcohol Issues to work with BAC­CHUS (Boost Alcohol Consciousness Concerning the Health of University Students). Reappointed each succeeding year through 1986 as an ACPA represen­tative to BACCHUS, he spoke and presented at various national/regional meetings, drafted Alcohol Market­ing Guidelines (1983), drafted Alcohol Policy Deter­mination Guidelines (1984), and was a primary speaker on the Implications of the National 21 Year Age Change.

As president-elect during 1984-85, his responsi­bilities included researching and contracting future annual convention sites and dates, determining and appointing all volunteer leadership for the association involving over 100 appointments, completing assess­ment of concerns and interests of membership, and determining leadership goals to meet those needs. In August 1984, he met with a group of over 40 enthusi­astic Louisiana CPA members in New Orleans in preparation for the 1986 national convention. At the close of 1985, ACPA membership was 7,703.

A featured speaker at the 1985 Boston convention, his presidential address at the annual Luncheon was a 10 minute 16mm film presentation which capsulized his discussions with various professionals on selected topics and issues such as the role of a professional philosophy, the adequacy of the knowledge base, the importance of standards, and the critical function of proper staff selection, advancement, and development were discussed.

As ACPA’s chief official, President Dennis Roberts communicated with the membership with “President’s Update” and “Presidential Communiqué” columns in ACPA Developments. He conducted leadership meet­ings of the association including the Executive Com­mittee, Executive Council, and the broader associa­tion-wide Business meeting in New Orleans on April 11, 1986. At the mid-year meetings in St. Louis, during November 6-9, at the Pallotine Renewal Center, the primary purpose was to focus on ACPA goals and the organization’s structure.

Roberts planned and implemented the agenda for all those meetings, guided the conduct of over 60 committees, taskforces, and other entities, supported the beginning of an Affirmative Action plan for the association, and participated in various leadership meetings and activities with other AACD Division leaders. He established special task forces for the leadership year including dissemination of the CAS standards (distributed in a special summer 1986 issue of ACPA Developments). He sponsored papers on hiring practices and retention of professionals in student personnel, determining the relationship be­tween liberal arts and student development, and issues related to financial aid and open access to higher education. President Roberts served as the offi­cial representative for ACPA at state and regional conferences and other association activities.

President Dennis Roberts guided the planning of the annual convention program and activities in New Orleans during Wednesday-Saturday, April 9-12, 1986, rather than the usual Sunday-Wednesday pattern. The convention theme was “Generativitiy: A Com­mitment to the Learning Process.” The annual conven­tion hosted 2,429 registrants. Over 900 participants were involved in presenting over 400 programs. The Placement Center reported that 321 employers listed 357 positions. Over 350 candidates interviewed throughout the three day period that the service was open. L. Lee Knelfelkamp, one of the initiators of the Generativity Project, was the keynote speaker at the opening general session in the Sheraton Hotel.

The Commissions were recognized with a special celebration— 25 years as part of ACPA – during the 1986 ACPA Convention. Following the Commission Carnival, individuals who had worked with commissions over the years were honored as special guests at the President’s Reception.

At the 1986 AACD convention in Los Angeles during April 20-23, ACPA had 38 programs, 30 content and 8 poster sessions. Over 300 ACPA members attended. The ACPA President’s reception was held April 21 in the complimentary suite.

From 1987 to 1993, Roberts chaired the Generativity Committee which has as its purpose the creation of non-print educational materials which enhance the graduate education and ongoing professional develop­ment needs of ACPA. Video tapes of Esther Lloyd-Jones and C. Gilbert Wrenn were completed and distributed, an effort to remind student affairs professionals of their heritage and preserve the memory of those who shaped the field.

Roberts has published articles about student de­velopment and leadership programs and other works related to student activities, commuter programs, professional staff selection, alcohol abuse prevention, and leadership development models. More recently (1989) he served as editor of Designing Campus Activi­ties to Foster a Sense of Community (New Directions for Student Services). He has spoken at national and regional forums on a variety of topics including stu­dent leadership, application of student development theory to activities, and residence hall programs.

ACPA honored him at the 1990 St. Louis national convention by selecting him Senior Leading Profes­sional for the Annuit Coeptis Dinner award recipients.

…My major campus involvements and professional contributions have been in the areas of defining and designing student leadership programs and substance abuse prevention. I have also been most profoundly shaped and moved by my work on the Generativity Project. I believe that what we are doing to capture our major generative personalities will be something which will, hopefully, last through the lifetime of student per­sonnel. This project has been generative for our pro­fession, for the senior professionals who have impor­tant things to say to us, and to the future of higher education. I think that the impact of this project is only beginning to be understood.

2006 was a milestone year when Roberts was recognized with ACPA’s Esther Lloyd-Jones Professional Service award. Having studied Lloyd-Jones’ legacy and advocated for a return to the core principles she espoused, Roberts expressed humility and deep appreciation in receiving an award named in her honor. Not long after receiving the Esther Lloyd-Jones award, Roberts published Deeper Learning in Leadership (2007), a book combining student affairs historical and philosophical issues with those of fostering deeper learning experiences in leadership for students. This book was a career-long dream that came to fruition with the coming of time, vision, and integrity of practice.

The closing phase of Roberts’ career life was spent seeking to understand other national and cultural contexts. In his work at Qatar Foundation, he attempted to redefine student affairs practice in the Arab and Islamic setting and with the fundamental premise of student learning being a shared responsibility among faculty, staff, and students alike. Qatar Foundation’s Education City emerged as the center of quality higher education in the Middle East as it introduced one of U.S. higher education’s distinctive qualities – engaged learning that permeates all of students’ experience in and out of class.

He and his wife, Diane, are the proud parents of two daughters, Devin and Darbi, who have joined in the experiment of learning and striving to be global citizens of the 21st century.