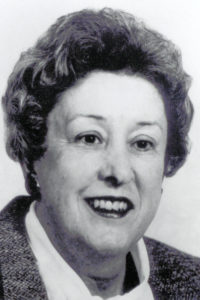 She was the 19th woman among the volun­teer leaders. Her election was reported at the annual convention in Washington, DC during the Business meeting on March 31 in the Sheraton Washington Hotel Ballroom.

Employed at The Ohio State University (OSU) in 1985, she began as Professor of Higher Education and Student Affairs in the Educational Policy and Leader­ship division, Columbus campus. During 1986-87, she served as Dean and Director of the OSU campus at Mansfield and taught counseling courses. In 1989, while serving as a Professor, she was appointed Direc­tor of the Student Personnel Assistant Program on the main campus in Columbus. Her later involvement provided a focus upon graduate student programming in student development and graduate courses she taught in higher education administration.

For 40 years of her professional career, from 1951 to 1991, her administrative activities included resi­dence life, student programming, managerial, execu­tive, and coordinating responsibilities. During many of those years she was involved in formal instructional responsibilities in professional preparation programs which focused upon counselor education and student personnel administration. She chaired 44 Ph.D. and over 380 M.A. committees to completion.

Born and reared in New London, Wisconsin, she completed her undergraduate work at Northwestern University where she received the B.S. (1952) and M.S. (1953) degrees. For her bachelor’s degree, she majored in Physiology with minors in Psychology, Botany, and English. At the master’s level her major was Guidance and Counseling with a minor in Educational Psychol­ogy. During 1951-53 she was employed at nearby Kendall (Illinois) College as Residence Director and Social Program Coordinator. With the completion of the master’s degree, she accepted an appointment as Director, Developmental Reading Laboratory, and Head Resident Director at Wisconsin State College, Whitewater, 1953-55. During the summer of 1955, she attended the University of Minnesota (UM) to begin a doctoral program. She went to Indiana University for the next two years as Area Director of the Residence Hall Complex and part-time Instructor. In 1957 she continued doctoral studies at Michigan State Univer­sity (MSU) and worked as a Teaching Graduate Assis­tant, Administrative and Educational Services. She was promoted to In­structor the next year and served as a Coun­selor in the Student Counseling Service Center. In 1959, MSU granted her the Ph.D. in Counseling Psychol­ogy with a minor in Administration of Higher Education. The title of her dissertation was “Faculty Percep­tions of Student Person­nel Functions.”

With the doctorate, Laurine E. Fitzgerald accepted an appointment as Associate Dean of students and Assistant Professor of Psychology and Education for three years (1959-62) at the University of Denver, where she received the Evelyn Hosmer Award for Outstanding Faculty Woman (1962). She returned to UM Twin Cities where she was Staff Counselor, Stu­dent Counseling Bureau, and also Counselor for the Carnegie Foundation Project (“Minnesota Plan for the Continuing Education of Women”) and Assistant Professor of Counseling Psychology (1962-63). At MSU the next 11 years, she served as Assistant Dean of Students until 1970, then Associate Dean and Direc­tor, Division of Education and Research until 1974. Also, she was Associate Professor of Counseling, Per­sonnel Services and Educational Psychology (1963-68) and Professor of Administration and Higher Edu­cation (1968-74). At the University of Wisconsin-Oshkosh (UW-O) for the next 11 years, she was Dean of the Graduate School, and Professor of Counselor Education. From 1974 until 1980, she also served as Director, Northeast Wisconsin Cooperative Regional Graduate Center. In 1980, she received the UW-O College of Education Mandala Award. In 1985 she accepted a new position, full-time teaching at OSU.

A life member of APGA/AACD since 1960, Betty Fitzgerald chose ACPA as her primary division. For 18 years she assumed editorial responsibilities with the Journal of College Student Personnel (Journal). From 1965-1976 as an associate editor, she also prepared the “Association News” section followed by an “Infor­mation and Issues” column. At the 1975 national convention in Atlanta, a majority of the Executive Council members voted her editor-elect for 1976-77, and then she served two terms (1977-79 and 1980-82) as editor of the Journal. At the 1976 national convention In Chicago, she became an ex-officio member of the Executive Council. She requested the Council to upgrade the editorial board and to indicate additional names to achieve balance by gender, race, compe­tency, and by year of expiration.

Present for most of the Council meetings for the ensuing years, she presented on numerous content programs and at authors’ workshops during national conventions. At the Marydale Retreat Center in Erlanger, Kentucky, in November 1979 during the mid­year meetings she expressed concern about multiple submissions by authors. She served so capably as editor that President Cynthia Johnson claimed that under Fitzgerald’s direction, the Journal was the best in the field. At the council meeting on March 29, 1981 in Cincinnati during the national convention, Fitzger­ald reported that the editorial board was equally balanced by gender, type of institution, employment role and status, and geographical region. At the De­troit convention in 1982, President David Borland presented her the first Presidential Service Award at the Luncheon on March 18 in the Detroit Plaza’s Columbus Ballroom.

Elective offices she held prior to the presidency included that of secretary. During the 1965 national ACPA/APGA convention In Minneapolis, her election was reported at the Capp Towers Motor Hotel during the Council meeting on Saturday, April 10 and at the annual Luncheon two days later. She served as secre­tary during the presidential administrations of Ralph Berdie and Bernard Black. In the 1968 election, she was chosen Council member-at-large for a three-year term.

During 1967-68 when Elizabeth Greenleaf was president, Fitzgerald chaired the Program Committee. ACPA members assembled in Detroit following closely the assassination of Martin Luther King, Jr. She was recipient of the APGA Distinguished Professional Service award that year. At the ACPA Executive Coun­cil meetings, a Task Force on Race and the College Community was formed. Fitzgerald and President­-elect Charles Lewis were requested to identify names of persons best qualified to speak on the Negro in America. Lewis appointed her to chair the first Black Task Force during 1969-70. She was expected to continue the identification of ACPA members and qualified administrators of ethnic minority status to comprise the targeted focus of the task force. At the mid-year meeting of the Council in St. Louis during November 1969, Lewis appointed her to chair an ad hoc Committee on the Role of Women in the Profes­sion. One meeting was held in March 1970, a lengthy report was filed with the Council, and the task force was discharged with thanks during a Council meeting at the national ACPA conference in St. Louis on Sunday, March 15.

In mid-September 1970, she was a representative to the Tripartite Committee on merger/cooperation of NASPA, NAWDAC, and ACPA. At the 1971 national APGA/ACPA convention in Atlantic City, she reported for the Task Force on the Status of Women in Student Personnel Work. One result of her report was the appointment of ACPA’s first Task Force on Women by the Executive Council. A member of that first group, she was the second chairperson of the Task Force on Women during 1972-74. She chaired the ACPA Ac­creditation Committee during 1972-73.

There were additional significant appointments during the 1980s. President Susan Komlves appointed Fitzgerald Historian/Archivist in 1982. She wrote a tentative job description for her new role in this new position. In the August 1982 issue of ACPA Developments, she intro­duced a new column entitled “ACPA Flashbacks.” At least 15 issues of Developments included historical data provided by Fitzgerald. During the Executive Council meeting at the Houston national convention on March 16, 1983, she discussed work that had been completed toward establishing the ACPA archives at Bowling Green State University’s Jerome Library, designated as the holder. An oral history under the direction of the Historian/Archivist was approved at the mid-year Council meeting in November 1983 at St. Louis.

At the ACPA/NASPA joint convention in Chicago (1987), she was appointed to chair the Journal Editor Search Committee. She chaired the ACPA Awards, Commendations and Memorials Committee during 1988-89. At the Executive Council mid-year meeting in St. Louis on November 13, 1988, a report indicated that she was working with a committee to develop a refined written proposal for a project for Public Aware­ness of Student Affairs.

As president-elect during 1989-90, she was one of the ACPA/NASPA Liaisons, and she chaired the ACPA Bylaws Committee. As president, she presided over the Executive Committee and all other official meet­ings. At the 1990 ACPA conventions in St. Louis, the Executive Council passed a motion which directed President Robert Brown and President-elect Fitzger­ald to appoint a committee to examine the continuing ACPA/AACD relationship. The two presidents ap­pointed a subcommittee of the association’s recent past-presidents to study financial, legal, logistical, and planning/philosophical issues and requested them to submit their report to the Executive Council at the fall 1990 Council meeting. The Council would decide whether or not a referendum vote by the ACPA mem­bership for disaffiliation was necessary, depending upon the outcome of their deliberations.

At the Luncheon in the Marriott Hotel on April 3, 1990, during the annual convention in St. Louis, Betty Fitzgerald delivered her presidential address. The title of her statement was “Synergy…,” the theme for the organizational year 1990-91. “Action Through Leaders, Advancing Non Traditional Approaches” was selected the 1991 convention theme, which spelled out the name of the host city, Atlanta, where members would meet during March 17-20 for ACPA’s 64th annual convention.

On October 8, 1990, President Fitzgerald signed a contract to have a Directory of members published. Plans were to send the Directory with a protective shield to membership by first-class mail in January 1991.

Early in November 1990 the Executive Council met for their mid-year meeting in St. Louis. Among actions taken regarding the relationship of ACPA to AACD, the Council approved a unanimous endorsement for a referendum to members. Another official action taken, although not by unanimous vote, was a positive recommendation from the Council for dissolution from AACD. The referendum was delayed until April or May 1991.

Among honors and recognitions the association granted her, Betty Fitzgerald was named a Senior Professional to attend a special Annuit Coeptis dinner with graduate student honorees during the annual 1983 convention in Houston. At the 1984 national convention in Baltimore, she was among the first group of Senior Scholars selected by ACPA. Among her activities as a member of that group for the next six years, she presented at invited sessions during an­nual convention programs, met at Estes Park, Colo­rado, for a symposium with other Senior Scholars who prepared a six-page white paper which was included in the packets of all convention registrants at Chicago in 1987, and chaired the Senior Scholars Project of the Professional Development Committee during 1987-88.

A member of numerous honoraries and service societies, Laurine E. Fitzgerald was the author of three edited notebooks, chapters in four reference texts, approximately 30 articles in professional journals, and frequent articles in newsletters. She made many presentations yearly to state, regional and national associations and community groups.