Melvene Draheim Hardee was the eighth woman to become president of ACPA. The announcement of her election as president-elect was 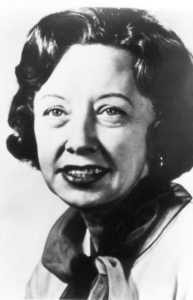 made on Sunday morning, April 26, 1961 by the Nomination Committee chair at the opening Executive Council meeting at the Denver convention held in conjunction with the other Divisions of APGA. Hardee was Professor of Higher Education at Florida State University and was the author or editor of approximately 25 professional publications in the form of periodical articles, chap­ters or sections in books, or entire books.

Born and reared in Clarion, Iowa, Melvene Draheim graduated from the local high school and attended the University of Northern Iowa that fall, located about 60 miles from her home. An honor graduate when she completed the B.A. degree three years later, Northern Iowa presented her a Distinguished Alumna Award in 1967. For nine years during 1934-43, she taught In Iowa public schools at Vinton, Hampton, and West Waterloo. At Hampton she held the position of Dean of Girls. At West Waterloo she chaired the Department of English-Speech. One year during the 1930s she en­rolled at Teachers College, Columbia University as a Roberts Fellow and completed her M.A. degree.

A teacher at Stephens College (Columbia, Missouri) for four years during the 1940s, one of her duties was Counselor in the Occupational Guidance Depart­ment. At the University of Chicago, she served as a Counselor in the women’s residence program and was an Instructor in the University College. As a University Fellow she enrolled in classes taught by Carl Rogers and received the Ph.D. degree (Student Personnel Administration) in 1948. The title of her dissertation was “Evaluation of a Program of Occupational Guid­ance,” focusing on occupational/career choices of women.

That summer she married Thomas L. Hardee and accepted an appointment at Florida State University (FSU) as the first Coordinator of Counseling and Advisement. She was promoted to Professor of Higher Education in 1958, one of three founding faculty assembled to form the new Department of Higher Education (now the Department of Educational Lead­ership) at FSU. In 1980 she was the first Director of the Institute for Studies in Higher Education. As of May 15, 1990, Melvene Hardee was named Professor Emerita-Higher Education. When she retired she was the Senior Professor in the higher education program. Currently she has been honored at FSU by the estab­lishment of a Center for Women in Higher Education Administration, named the HARDEE CENTER FOR WOMEN, etc. For a number of years she gave a Hardee Fellowship, $7,000 and $ 10,000, for a doctoral woman stu­dent in higher educa­tion.

Hardee attended each of the annual con­ventions from 1952 at Los Angeles through her presidential year (1963) at Boston. From 1952 through 1961 (the year she became president-elect) Hardee addressed topics or presided at programs of the national conventions on research, writing, and various phases of student personnel work. At Los Angeles she presented “Principles for Integrating In­struction and Student Personnel Services in the Coordinated Program of Counseling” at a symposium. At Chicago in 1953, she spoke on “Something Old and Something New” on the general subject of Writing for Professional Publication. Later on the convention program she was a discussant on Student Personnel Approaches to General Education. Other program topics she addressed throughout the years included: Articulation of College Counseling with Programs of Counseling in Agencies outside the College (1954); Studies of Behavior in Human Relations (1955); Per­sonnel Adjustment Courses in Colleges and Universi­ties (1956); Providing Higher Education Facilities through Regional Action (1958); The Whole University and the Whole Student (1959); Can Professors Coun­sel? (1960); and The Comprehensive Counseling Pro­gram for Higher Education (1961).

Hardee made contributions to ACPA committees. During 1953-54 she was an ACPA representative on the APGA Nominations Committee. She chaired the ACPA Publications and Research Committee during 1956-58 and met with committee members during the annual conventions. She was among those who at­tended the pre-convention workshop at Detroit in 1957. During 1961-62 (when she was president-elect) she chaired the Budget Committee. Melvene Hardee held officer assignments in ACPA for seven years. During the summer of 1954, the ACPA Executive Council appointed her secretary-treasurer (1954-56). In the 1957 elections she was a membership choice for member-at-large (1957-58) on the ACPA Executive Council. When the Executive Council members as­sembled for their first meeting prior to the Cleveland convention program in 1959, the Nominations Com­mittee chair announced Hardee as ACPA secretary for a two-year term (1959-61).

At Chicago early in October 1960, she represented ACPA at the ACE annual meeting. As ACPA represen­tative she attended the ACE meeting a year later in Washington, DC. Hardee served as ACPA president­-elect during 1961-62 and president during 1962-63. She represented ACPA on the APGA Executive Council from 1961-63.

President-elect Melvene D. Hardee initiated the ACPA Commission system with Gordon Klopf during the summer of 1961. The Commissions were activated to develop the 1963 Boston convention program. During 1961-63, approximately 250 people were in­volved under the Hardee-Klopf leadership. The Com­mission system was retained with modifications and expanded.

Hardee’s presidential year was directed by action taken at the annual Business session during the 1962 ACPA convention in Chicago, as a participating Divi­sion of APGA. A portion of her executive mission was to conduct an organizational study of ACPA. President Hardee appointed a Steering Committee and chaired a two-day meeting in Washington, DC late in May 1962 to consider the study.

She mailed a number of issues of Top Drawer Talk, a presidential memo, to approximately 150 ACPA officers, committee members, and others between May 1962 and the publication of a first edition of an ACPA newsletter (ACPA Today) in March 1963 which included the results of the membership survey con­ducted the previous year.

In June 1962, she selected from the Directory of Higher Education some 70 associations and directed a letter to the executive officer of each association. She inquired if the two organizations could work together along five general areas. In 1974, Hardee said that she worked hard to get ACPA coordinated with every higher education agency on Capitol Hill as well as with the Southern Regional Education Board group.

Early in 1963 President Hardee sent a rose-colored 12-page publication to ACPA members announcing the convention. The thirty-sixth ACPA national convention (the eleventh as a Division of APGA) was held at Boston in April 1963. The convention theme was “Student Personnel Work in Higher Education, The Years Ahead.” ACPA headquarters hotel was the Sheraton Plaza, where most of the 68 programs (utilizing 372 participants) were scheduled.

President Hardee presided at the ACPA Executive Council pre-convention self-study workshop. That group adopted a revised report which was distributed to those who attended the annual Luncheon. Among her other presidential assignments at Boston, she presided at the Executive Council meeting, the Delegate Assembly session, the annual Luncheon, and the Business session (which followed the Boston Town Meeting) attended by 125 people. The Town Meeting was staged to defuse a potentially stormy Business session. The issue of secession from APGA was tabled momentarily.

Approximately 500 people were present at the Luncheon when President Hardee delivered her ad­dress titled “Perception and Perfection.” Among her closing remarks were the following:

The real renewal of the image of student personnel work— as well as the renaissance of this Association-will come about through the ideas and energies of highly motivated young professions crowding the field and seeking our affiliation. This, in turn, will exact of us “old pros” a singular performance in both practic­ing and professing in the stream of student personnel work.

At the 1964 national convention in San Francisco, Hardee was presented an award for Professional Serv­ice to ACPA. Later she served on an ACPA ad hoc Committee on Student Freedoms, and she was an Adviser to the Committee on the Status of Student Affairs in Higher Education. During 1980-82 she was a member of the ACPA Long Range Planning Committee.

At the 1987 ACPA/NASPA convention in Chicago, Melvene Hardee presented the keynote address- a documentary with sound, music, and narration- to observe the 50th anniversary of the profession’s chartering. She provided a superb history and heritage of student affairs in her address titled “The 1937 Student Personnel Point of View: The Birth of a Charter.” At Chicago she was proclaimed an ACPA Senior Scholar. After delivering her address, she took her script and planned to expand it into a manuscript on the contributions of Southern deans of students and staff to the integration process, countrywide.

On June 21, 1990, Melvene Hardee performed in videotaping for the ACPA Generativity Committee. Her co-performer was Richard Mashbum of FSU. The production was to be aired at the 1991 ACPA national convention in Atlanta.

A founder of the Southern College Personnel Asso­ciation (1949) now termed SACSA, Melvene Hardee served as president during 1955-56. At the SCPA conference in Atlanta on November 11, 1976, that organization established the Mel Hardee Award to recognize outstanding contributions to Student Per­sonnel Work. At the SACSA convention in Tampa during 1989, Hardee announced the first FSU forum: Women’s Presence in Educational Administration, scheduled for November that year. She presented a copy of the program for southern college clientele in the interests of bringing women of the southern region together. During the annual SACSA meeting at Savan­nah, Georgia, in November 1990, she was honored with a life membership in that organization.

In 1983 at Clairon, Iowa, her hometown, she insti­tuted and maintained The Draheim Historical Library named after her parents who were ardent historians. She dissolved the Memorial Library in 1990, making thoughtful distribution of the three floors of structure and the scores of books, pictures, artifacts, etc. A large share of the holdings was coopted by the Iowa State Archives in Des Moines. Another share was taken to her 900-acre farm, High Noon, in Southern Georgia. For 28 years following her mate’s sudden death, she combined operation and management of the farm and administrative-teaching duties at FSU. She drove 89 miles one way in her antiquated trucks from Tallahassee to Valdosta, “moonlighting” on weekends and holidays with a second occupation. She said that this operation kept her in touch with reality. In June 1968 a forestry award proclaimed her to be an American Tree Farmer in recognition of her well-managed lands.

Nationally prominent in the college student person­nel administration field, doctoral hoods have been placed on 123 graduates in higher education for whom she served as major adviser. By invitation, she has consulted with faculty, staff, and students in many women’s colleges, viewing curriculum and co-curricular activities.

Melvene Draheim Hardee resided in Tallahassee until her death on December 16, 1994 in Tallahassee, FL. An article regarding her death appeared in the January 1995 issue of ACPA Developments.