Among the ACPA list of honored professionals elected president was Patricia Ann Kearney, the 49th and 18th woman to serve at the highest 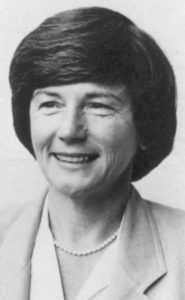 level of leadership available to members. She was recognized the election winner during the association’s Business meeting on March 17, 1987 at the joint ACPA/NASPA national convention in Chicago. The June issue of ACPA Developments informed the general member­ship. She was 43 years old and Director of Housing at the University of California-Davis (UC-D) since 1985. Currently, she is Deputy to the Assistant Vice Chan­cellor for Student Affairs at UC-D.

Born in Wilkes-Barre, Pennsylvania, Patricia Kear­ney attended Michigan State University where she received her B.A. degree (Psychology, 1965) with concentration in Social and Industrial Psychology. The next year at Indiana University she earned the M.S. degree (Higher Education), concentrating in Counseling.

She accepted a position as Head Resident Advisor at Western Illinois University during 1966-68, then became Assistant to the Vice President for Student Affairs at State University of New York, Buffalo, for the next two years. She returned to her home state in 1970 for two years as Assistant Dean of Women/Assistant Dean for Student Life at Lock Haven State College, after which she traveled cross country to Oregon State University to begin a doctoral program in College Student Services Administration.

While she studied for her master’s degree at Indi­ana University, two of her professors (Kate H. Mueller and Elizabeth Greenleaf) encouraged her to join the association in 1966. She became active in 1975 as a member of Commission III, Student Residence Pro­grams, one of the largest of the commissions. She chaired that commission’s Graduate Student Housing Task Force during 1975-76 and was elected to the commission’s Directorate Body twice, 1976-79 and 1981-84. She chaired the Elections Committee, was Liaison to the Standing Committee for Women (1981), and served as a mem­ber of the Commission III Evaluation Project. Subsequently, she was elected to chair Com­mission III during 1982-84. Meanwhile, she also joined Commissions I and XII.

The ACPA member­ship elected her Vice President for Commis­sions during 1984-86, which included mem­bership on the Executive Council. For those two years, her column, “From the Commissions,” or a similar title, appeared regu­larly in ACPA Developments. The commissions spon­sored 37% of all activities offered at the national convention in Boston (1985) and 40% of the programs at New Orleans the next year, when the 25th year of Commission activity was celebrated. At the annual Business meeting, she was presented an award for outstanding contributions from those who chaired the commissions.

Patricia Kearney experienced a variety of the ACPA committee assignments. For example, an appoint­ment, perhaps one of the most important for the association, occurred during the 1990 national con­vention in St. Louis. As a result of Executive Council action, President Robert D. Brown and incoming President Laurine Fitzgerald appointed Kearney to chair and coordinate a select group of ACPA past presidents, three who held office during the last half of the 1980s, to consider retaining affiliation with AACD. During 1983-84, two of her ad hoc committee appoint­ments were the ACPA/AACD Relations and AACD Membership Services to Commissions Study. During her year as president-elect, she reported attempts to reconnect both symbolically and realistically with AACD, trying to strengthen and continue the relation­ship, and she chaired the AACD Convention Commit­tee Study. As immediate past president, one of the committees she chaired was External Relations. During the fall of 1989, she attended the AACD southeastern regional leadership meeting as the ACPA representa­tive and found that almost no one had any idea as to what ACPA was all about. When she explained what she did, the question was raised: “Well why would you ever want to belong to AACD?”

In her presidential candidacy statement, Patricia Kearney stated that, in her view, “formal leadership means permission to influence—a strong sense of mission.” Her job, she said, “was to include two primary activities: influencing professional colleagues both within and outside the ACPA, and managing the organization.” One important project that was part of her mission was the recruitment of a more diverse population into the field of student affairs work. The diversity of student affairs professionals was not keeping pace with the student populations growing increasingly diverse. The ACPA leadership believed that increasing the diversity of student affairs staff was one of the most important issues facing the field. She prepared columns for the newsletter issues dur­ing her three years at the helm, 1987-90, including the “President’s Communiqué.”

Kearney opened her first Executive Council meet­ing on March 23, 1988 in Miami with showing a video tape on valuing diversity. Several months later in her “President’s Communiqué” column, she spoke about the ACPA’s long history of concern and action related to social Justice— a challenge to campuses to create education strategies for the continuing growth of ethnic diversity in institutions of higher education. She said that efforts to provide leadership in this area were reflected by the Affirmative Action Committee report and the announcement concerning “Cultural Diversity Road Shows.” At the opening general session of the national convention in Washington, DC on Wednesday evening, March 29,1989, she commented that education had ignored the contributions of people of color, and, in many cases, women. She encouraged higher education professionals to lobby and support a broadening and cultural integration of the curricu­lum. She said: “Every student, regardless of color, gender or lifestyle, has a need and a right to under­stand the multicultural/multi-gender basis of our civilization. We must widen the circle and make sure there is room for everyone.”

Mid-year Executive Council meetings were held in St. Louis during November 12-13, 1988 at the Seton Center. Among actions taken, the Executive Council endorsed the “ACPA AIDS Statement on Education and Policies,” approved the Seville (Spain) Statement on Violence prepared in May 1986 in support of the United Nations International Year of Peace, estab­lished Commission XVIII, Alcohol and Other Drugs, and endorsed the “Guidelines for Comprehensive Instructional Response to Alcohol and Other Drug Problems.” A motion was approved that the newly constituted Executive Committee could not vote on issues until July 1 of each year. Also, a motion to approve an additional meeting of the Executive Coun­cil each year in July beginning July 1989 passed. The new management plans she devised were to be imple­mented by the incoming president. The association’s membership registered 7,700 at the close of 1988.

At the Executive Council meetings in Washington, DC on March 28, 1989, the Awards and Memorials Committee was charged to report at the mid-year meeting about an Award for Contributions to Higher Education to link ACPA with the greater higher educa­tion community. Near the conclusion of the Business meeting on March 31, 1989, she recognized the con­tributions of the retiring Executive Council members by presenting each with a certificate of appreciation.

During the Executive Council meeting on April 1, 1989 in Washington, DC, her motions to allow the convention committee to schedule programs during the same time slot as the annual Business meeting and the eating portion of the ACPA Luncheon (not against the President-Elect’s speech time) were ap­proved.

The theme of the 1989 national ACPA convention in Washington, DC during March 29-April 1 was “Vision and Will.” Kearney declared that professionals must be able to see what needs to be done, and then commit themselves to do it. The ACPA headquarters hotel was the Sheraton Washington. Twelve pre-convention workshops were presented. President Patricia Kear­ney reported that 3,448 registered to experience the convention theme at a fee of $115, the same as the previous year. More than 790 candidates registered with over 580 employers at the Placement Center. The 25th anniversary of the ACPA State Divisions was celebrated.

As she presided at the annual Business meeting on March 31, 1989 in the Washington Ballroom, Kearney reported the following accomplishments during her term: (1) The Diversity theme begun by President Marveling Hughes in 1987 was continued; (2) Work was started on the “National Careers in Student Development Week;” (3) she worked closely on the planning for the ACPA 1989 convention; and (4) An internal management system that would enable the association to make more rational decisions was developed.

Over the past 15 years, Patricia Kearney has con­ducted over 100 training and developing sessions and seminars, keynote speeches, and conference presen­tations in numerous content areas which include: employee evaluation, performance appraisal, team building, organizational theory, career development, time management, communication, listening, stress management, goal setting, planning and decision making, ethnic awareness, women and leadership, diversity in the work place, conflict management, appreciating differences, human development theory, etc. Over 30 presentations were at the national and state level. She has been a consultant with industry, school systems, and colleges in California. She has authored several journal articles. During her year as president, she presented keynote speeches at CPAs in Washington, DC, New York, and Ohio. At the 1989 AACD national convention in Boston earlier in March, prior to the ACPA convention, she was the ACPA Luncheon speaker. Her address was titled “Multicul­tural Campus Development.” In the 1990s she was one of the pioneers in developing public-private partnerships on college campuses. On the University of California campus she developed these partnerships to economically develop two child care centers, a family housing complex, and two apartment complexes for upper division students. In addition, Pat gave numerous presentations on public-private partnerships for ACUHO-I, NACUBO, and various state institutions. In addition, she published chapters in various publications for ACUHO-I and NACUBO.

My active participation has continued over many years primarily because of the strong sense of per­sonal connections one makes as part of the ACPA leadership structure. Networking, both professional and friendships, is strong in both the Commissions and State Divisions.

The upper level leadership positions go beyond that networking. To take on what amounts to a second full-time job requires a passion. I had, and still have, one. It was to have the opportunity to hold positions which would provide me with an opportunity to share with my colleagues the necessity for preparing ourselves and our students for a truly pluralistic society. The appreciation of diversity is a necessity for the 21st century, given our knowledge of the demographics of the United States. I am grateful for having had the opportunity to share this message with thousands of student personnel workers.

Since retiring Pat has continued to consult with selected colleges. She is currently living in Sisters, Oregon and serves on the Budget committee of Central Oregon Community College. She also volunteers at the Sisters Library. One or two international trips a year along with experiencing the great outdoors in central Oregon through hiking, kayaking, snow shoeing, and cross country skiing keeps her active.