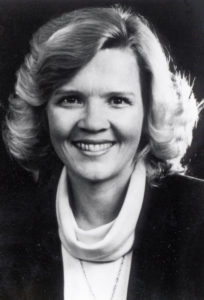 organiza­tion. When notified of her election in February 1981, she was Vice President and Dean of Student Life at Stephens College in Columbia, Missouri (1978-85).

At 34 years of age, she was among the youngest presidents when elected, truly an example of the culture of ACPA that taps talent in young profession­als’ potential. The only president-elect to give birth in office, Susan Komives and her husband, Ralph, had their son Jeffrey later that year. She received the telephone call informing her about the ACPA vote for president-elect two days after she found out she was pregnant. Eight years later, when Jeffrey went with Ralph and stepdaughter, Rachel, to visit when ACPA held the 1989 national convention at Washington, DC, those who officially met Jeffrey said they knew him before he was born. Eventually, Jeffrey pulled his mother aside and asked: “Mom, did EVERYONE know me before I was even born?”

Born in Maine and reared in Vero Beach, Florida, Komives attended college at Florida State University (FSU) where she received a B.S. with a major in Mathematics and a minor in Chemistry in 1968, after completing two years in the honors program. FSU awarded her a M.S. (Higher Education with an inter­departmental emphasis in Student Personnel Admini­stration) in 1969. At the University of Tennessee (UT) at Knoxville from 1969 to 1972, she was Area Coordi­nator, becoming Acting Director of Residence Halls (July-December 1972), then Assistant Director of Residence Halls in 1973. She began doctoral study at UT in 1970, the year she joined APGA/ACPA. Her Ed.D. (Educational Administration and Supervision with collateral areas in Higher Education and College Student Personnel) was granted to her in 1973. The dissertation title was “Leadership Behavior of Chief Student Personnel Administrators and its Relation­ship to Morale and Job Satisfaction.” After receiving her doctorate, she left her work at UT to accept the position of Associate Dean of Students at Denison (Ohio) University (1973-78). At Stephens College from April to July 1985, she concurrently served as Interim Director of Admissions and Dean of Student Life, before being named Vice President for Student Devel­opment at the University of Tampa (1985-87).

After 18 years in administrative positions at both public and private institutions and 7 years as a Vice President in two institutions with teaching and coun­seling responsibilities, she left administration in 1987 to become a graduate faculty member at the University of Maryland-College Park. Komives is a full-time professor in the College Student Person­nel program in the Counseling and Personnel Services department and works with the Students Affairs Divi­sion as a Faculty Asso­ciate, focusing particu­larly on leadership de­velopment projects. A Senior Scholar with the James MacGregor Burns Academy of Leadership, she is co-founder of the National Clearinghouse for Leadership Programs founded in 1990 and research editor for Concepts & Connections. Among other publications she is the co-editor of Student Services (Jossey-Bass 1996, 2003), and co-editor of Leadership for a Better World (Jossey-Bass, 2009) and the Handbook for Student Leadership Programs (NCLP, 2006), co-author of Exploring Leadership (Jossey-Bass 1998, 2007), and co-author of Management and Leadership Issues for a New Century (Jossey-Bass, 2000). She was a member of the NASPA/ACPA team that wrote Learning Reconsidered and Learning Reconsidered2 as well as the ensemble that developed the Social Change Model of Leadership Development. She is co-principal investigator for the Multi-institutional Study of Leadership (www.leadershipstudy.net).

A long term member of Commission III, Student Residence Program, during her ACPA professional career, she served on that commission’s Directorate Body during 1971 – 76. After serving as the commission’s Vice-Chair for Task Forces (1972-74), at 28 years of age she became Chair of Commission III for two years (1974). Subsequently, she was elected the second ACPA Vice-President for Commissions (1976-78) at the age of 30. She also became a member of the Executive Council in 1976 and served as a member of the Media Publications Board. As Vice-President for Commissions, her column “Commission Potpourri” consistently appeared in ACPA Developments during those two years.

At the 1978 national ACPA convention in Detroit, the first Commissions’ Carnival was held on Monday evening, March 13. The carnival is still a popular annual national convention event. At the Executive Council meeting on the previous day, her motion to form Commission XVII, Commuter Students, was approved.

Elected to a three-year term as member-at-large on the Executive Council in 1978, she continued to be a member of that important body through her presiden­tial term (1981-84), during 1985-86 when she was elected one of ACPA’s representatives to AACD’s Governing Council to a one-year term, and again during 1988-91, when she was elected to a regular three-year term. She served on AACD’s Governance Restructuring Committee. Since 1976 she has served on the ACPA Executive Council for 10 years. She was appointed the ACPA Director to the Council for the Advancement of Standards in Higher Education (CAS) governing board in 2005, was elected to the CAS Executive Committee in 2004 and as CAS President in 2008. She serves as CAS President from 2008-2012.

During the Executive Council meeting in Los Ange­les on March 29, 1979 for continuing and new members, her motion for ACPA to meet jointly with APGA at Detroit in 1982 was approved. She chaired the Executive Council ad hoc committee which prepared the Convention Policy and Procedures Manual and the Commission Chairperson Manual. The former was adopted during the mid-year meeting early in Novem­ber 1980 at Erlanger, Kentucky. At the Business meeting during the 1982 national joint APGA/ACPA convention in Detroit on March 18, her motion to form a standing committee on New Professionals was ap­proved.

While president-elect (1981-82), she chaired ACPA’s national Membership Committee in addition to be­coming a new mother, serving as Vice President at Stephens College, and chairing the Bylaws and Budget Committees— a very busy year! At the national con­vention in Detroit, she scheduled ancillary meetings with the chairs of Commissions, Committees, state Membership, national Membership, and conducted a new leadership orientation in addition to presiding at an Executive Council meeting for continuing and new officers of the Executive Council. She had a seven page speech that she did not give at the Luncheon.

During her presidential term, a “Presidential Communiqué” column appeared regularly in ACPA Developments. Two committees with very exciting potential were established. She announced the crea­tion of the Generativity Project to devise and dissemi­nate student development theories via media technol­ogy, an educational series. She and Lee Knefelkamp dreamed up this project at a dinner in Washington, DC— a method to bring master teachers of student development theory bases to the grass roots member via video tape. The project evolved after that to include living histories and other material, but was envisioned as professional development. The other standing committee, created by Executive Council action at Houston in 1983, was the Theory and Research Board, which strongly emphasized student development theory and research.

President Komives presided at the mid-year Execu­tive Council meeting at the Alverna Retreat Center outside Indianapolis, Indiana, during October 20-22, 1982, when that body voted to revise the ACPA con­vention policy to have a program component in the annual APGA convention each year and conduct a separate national ACPA convention. ACPA member­ship at the close of 1982 was 7,032.

Komives disseminated her written report to the Executive Council in February 1983, prior to the national convention in Houston. The Policy and Proce­dures Manual was made available to all Executive Council members, Commission Chairs, and any chairs of standing committees, ad hoc, or task force who had an interest.

At the Executive Council meeting on March 13, 1983, during the national convention in Houston, state division charters were issued to Iowa, Washing­ton, DC, Vermont, New Mexico, and Texas. The Florida CPA charter was dissolved. A Senior Scholars Program was recommended for initiation at the 1984 national convention in Baltimore. In the afternoon the Execu­tive Council reconvened to discuss, act upon items, and complete the basic work generated by the Long-Range Planning model, a key role in implementing what Past-president Cynthia Johnson initiated with Paul Bloland’s leadership in 1980.

During her term, ACPA made positive commit­ments to the ACPA/APGA relationship work to the mutual benefit of both organizations and increased ACPA participation in APGA. ACPA assumed an asser­tive posture within APGA in efforts to heal their relationship. Some years later as the ACPA representative the AACD governing board she made the motion for ACPA’s withdrawal from AACD at the AACD Board meeting.

The entire schedule of the convention program at Houston was published in the spring 1983 issue of the ACPA Developments. Fifteen pre-convention work­shops were scheduled. The theme of the convention during March 13-16 was “Conquering Our New Fron­tiers: Creativity, Technology, and Untapped Resources.” President Komives, who believes in creative thinking and visionary leadership, was thrilled to have Marilyn Ferguson, who had just published The Aquarian Con­spiracy, be one of the keynoters at Houston.

Among her convention activities, Komives presided at the opening session, the Luncheon, and the annual Business meeting. On March 14, she chaired a panel of institutional presidents who spoke on the topic of “Untapped Resources.” NAWDAC held its annual conference at the Hyatt Regency Hotel immediately following ACPA. Komives has always believed in col­laboration and was pleased that ACPA’s Houston convention was back-to-back with NAWDAC sharing Ferguson as a key note speaker. She has worked closely also with NASPA on many projects.

For the first time since 1977, the association went back to a dual convention format. Over 60 ACPA programs were presented during the national APGA convention at Washington, DC during March 20-23, 1983. ACPA headquarters was at the Shoreham Hotel. Komives was present at the APGA Senate meeting on March 23 when APGA was renamed AACD (the word “Development” was a compromise to include ACPA).

Komives has been honored to be asked frequently to be a speaker or deliver papers in local, regional, national, or international conferences. To date she has given over 500 such presentations and has been honored to be invited back to speak to several groups more than once! She frequently speaks on student leadership development, self-renewal, creating healthy work environments, leadership issues in student af­fairs and higher education, and transformational or visionary leadership. Her first national keynote speech was at AUHO-I in Burlington, Vermont, in 1979.

…It makes me feel a bit old at only 43 to realize what a key opportunity to be so heavily involved in ACPA at such key times in our history— from the early 70s! I realize with great pride all I have learned through ACPA and the part in our college student personnel history I may have influenced. I think I am as proud of being a positive, futuristic speaker influencing the professional who comes to get re-charged at a regional or national conference as I am of my ACPA contribu­tions and publications.