The 1968 ACPA president-elect was Charles L. Lewis. He was the twentieth man to serve as ACPA president. The official announcements of 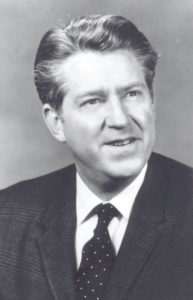 his election at the Dallas convention were made at the ACPA Ex­ecutive Council meeting Sunday morning, April 7 and at the first Business session on Monday afternoon in the Sheraton Cadillac Hotel. He was Vice President for Student Affairs at The Pennsylvania State University. Lewis was 42 years of age, married to Charlotte J. Wynn, and the father of a son and two daughters.

Charles Lewis was born in Wellsville, near East Liverpool, Ohio. After graduation he enrolled at Ohio University (OU) where his undergraduate work was interrupted by a term of service with the U.S. Army as a non-commissioned Japanese interpreter. He gradu­ated with honors from OU. Lewis wrote about his undergraduate educational experience briefly in Presi­dential Reporting (1978):

Having a rather unique distinction of having a Bachelor of Science degree with a major in Guidance and Counseling in 1949 has caused me considerable amusement and satisfaction over the year. Ohio Uni­versity in those days was trying for the first time to develop a guidance and counseling program and they offered a bachelor’s degree with the proviso for three years’ experience prior to certification. I had the good fortune of starting a career in college student person­nel as an assistant to the Dean of Men in my senior year.

Lewis served as Assistant to the Dean of Men at OU for a year after graduation (1950). He joined the University of Minnesota (UM) staff in 1950 and during the next four years served as Administrative Assis­tant, Student Activities Advisor, and Associate Direc­tor of the Student Activities Bureau. Meanwhile, he earned the M.A. and Ph.D. degrees (Educational Psy­chology) from UM in 1952 and 1955, respectively.

The Lewis family left Minnesota for the University of North Dakota, where he was appointed Associate Professor of Psychology and served as the first full-time Dean of Men, the Dean of Students, and devel­oped a Student Personnel and Student Services Pro­gram, described as a “heady” experience.

During the next five years (1962-67) at the Univer­sity of Tennessee, Lewis was Associate Professor of Educational Psychology and Executive Dean. His assignment was to reorganize a complete decentral­ized student services program in the context of consid­erable racial tensions. He had a major role in helping integrate the undergraduate student body. In 1967 Charles Lewis was ap­pointed Vice President for Student Affairs at Pennsylvania State University where he served as Vice President for Student Affairs (1967-71) and as Re­search Associate and Assistant to the Presi­dent (1971-72).

Charles Lewis con­tinued at Penn State until August 1972 when he accepted the position of Executive Director of the general association—APGA. He was promoted to Executive Vice-President the next year and served in this position until a few months after the 1983 Washington, DC APGA Convention. Among the achievements during his tenure he is particularly proud that the serious finan­cial problems were improved, a Foundation was cre­ated with a balance of $1,000,000 plus, six new divisions were created, and membership grew from 25,000 to 42,000. With the support and help of elected officers, the three pronged thrust to establish credentialing were initiated and advanced— CACREP, State Licensure, and National Registry of Professionally Qualified Counselors.

In the spring of 1950, a group from UM including Lewis drove to Chicago to attend the annual conven­tion of the Council of Guidance and Personnel Asso­ciations. ACPA leaders were cooperating with repre­sentatives of other guidance-related associations to form APGA. Lewis was a member of ACPA in 1951 while he worked and studied at UM. He served as Proceedings editor of the 1956 convention in Washing­ton, DC, followed by his appointment to the ACPA Publications and Research Committee during 1956-58. In 1958 he was appointed Associate Editor of the Personnel-O-Gram (P-O-G) and retained on the Publi­cations Committee.

In the 1961 elections, he was voted a member-at-large to the ACPA Executive Council for a two-year term, and he attended the Executive Council meeting on Thursday, March 30 at the Denver convention. In 1964, Lewis was elected to the 20-member ACPA delegation to the 1965 APGA Senate. Near the conclu­sion of the 1964 annual ACPA Luncheon on Monday, March 23 in the Peacock Court of Hotel Mark Hopkins, a special citation was awarded Lewis for his editorial service with the Journal.

Lewis participated actively in the Executive Council meetings Saturday and Sunday, March 18-19, 1967 at the Dallas convention. At the Sunday afternoon meeting, he and two other persons were appointed to investigate convention sites, procedures, and other aspects. But APGA decided to hold the 1969 convention in Las Vegas instead of Hawaii. At the Statler Hilton on Tuesday afternoon, Lewis was a discussant on a program labeled The Basic Encounter Group with Carl Rogers as presenter and discussion leader. The next afternoon at the Adolphus, Lewis and another person discussed Function and Role of the Student Activities Staff member. In 1967, Lewis moved to Pennsylvania. During December 2-4, 1967, Lewis attended the ACPA Executive Council meetings in Chicago. At the 1968 convention in Detroit, Lewis reported little possibility of holding the full 1970 APGA convention in New Orleans. So he recommended that ACPA plan a separate conference or convention. When he reported on general convention problems at the Business session on Monday, April 8, he said that APGA Divisions were informed that if the annual 1970 convention were held in New Orleans, insufficient hotel space would be available to accommodate the ex­pected attendance. He was a discussant on the pro­gram called In-Service Training for Senior Student Personnel Workers in Cobo Hall on Tuesday morning.

Lewis attended the one-day ACPA Executive Coun­cil meeting in St. Louis on Tuesday, December 9, 1968. At the Las Vegas convention in 1969, President-elect Lewis was actively involved in the Executive Council meetings on Saturday and Sunday, March 29-30, and the Business session on Monday after­noon. March 31. Near the close of the Business session, incoming President Lewis summarized the highlights of his report titled “ACPA President’s As­sessments and Proposals for 1969-70” and published later in the Journal. One of his comments was as follows: “…I strongly believe our affiliation with the Ameri­can Personnel and Guidance Association continues to be strength when contrasted to difficulties confront­ing other associations in higher education.”

On Tuesday afternoon, April 1, Lewis was a dis­cussant on an afternoon program (chaired by Willis E. Dugan) titled “Education Professions Development Act.” On Tuesday morning in North 9 of the Sahara, Presi­dent Lewis presided at the Executive Council meeting.

The ACPA Executive Council met in St. Louis at the Chase Park Plaza Hotel (1970 conference headquar­ters) on Sunday and Monday, November 8-9, 1969 for mid-year meetings. President Lewis presided. The Commission Chairmen met jointly with the Executive Council members for the first time. ACPA membership as of March 1, 1970 was 7,490.

ACPA’s conference of programs in St. Louis held Monday through Wednesday, March 16-18, was the forty-third national meeting and the first separate as a Division of APGA since 1953. President Lewis pre­sided at the two Executive Council meetings and the annual Business session begun Monday afternoon and resumed on Tuesday night with approximately 200 members present.

On October 1, 1990 Lewis commented upon the future of ACPA:

It has been over 20 years since ACPA held its first separate convention and workshops in St. Louis. This was partly a compromise to avoid a vote on withdrawal from APGA. Since that time a costly separation effort was mounted and vote was taken, sustaining affili­ation. Once again we are at the threshold of a similar plebiscite on the same issue. My hope and dream is that this political conundrum be resolved and put to sleep so more leadership time may be devoted to significant professional matters and services.

Though Dr. Lewis has been retired for 25 years, he has remained actively involved in the profession through his work with public universities being evaluated for continuance of accreditation, and was involved in the creation of CACREP (Counseling and Counseling Related Educational Programs), Chi Sigma Iota (A scholarly related honorary for counselors on College Campuses), and CAS (Council the Advancement of Standards in Higher Education). He served two three year terms as the public representative on the CAS Board of Directors. He transferred his accrediting skills to non public education or foundations groups and on occasion has evaluated proposals and grant applications for several agencies and a large 501 C-3 Foundation. For eight years he did consulting work with the Central Intelligence Agency that involved mostly personal, psychological evaluations, and career pattern reviews.

His long standing Life Memberships in both ACA and ACPA and affiliation with NASPA and APA attest to his commitment to professionalism. On February 27, 2009 he stated,

These associations have contributed to defining education and career development for America’s children and youth and evaluating qualifications to practice. ACPA has particularly monitored Standards impacting Higher Education student growth and development alongside the academic curricula. The ACPA Journal stands out in monitoring and delivering higher education’s learning materials and ACPA’s convention serves in the evaluation, selection and delivery of materials.

Further, while reflecting on his early life he stated, A unique happenstance was the timing of my military service, the creation of the GI Bill, and my own educational experiences. Following World War II the GI Bill notably expanded the accessibility and affordability of higher education. My turning to a former high school teacher and Hi-Y Club advisor upon my return from army service kindled a major shift from civil engineering to a new major in education and teaching: psychology, guidance, and counseling. During my senior year, I by chance gained part time work experience through an internship in a rural high school career project and as a part time assistant to the Dean of Men for small student loans and residence counselors. As the first guidance major to graduate at Ohio University, I was afforded unique opportunities and support. My undergraduate advisor encouraged my acceptance and graduation from the University of Minnesota. Mentors in both Universities were national leaders in the counseling movement.

Upon retirement, Chuck and his wife, Charlotte, decided to remain in the DC area rather than return to a collegiate campus. The death of his wife occurred suddenly after nearly 39 years of marriage. In 1989 Lewis married Jane E. McCormick, who is a past president of NADWC. She retired early from Pennsylvania State where she served as Assistant Vice President of Administration. They remained in DC until 1995 when they moved to a large retirement community in Lancaster, PA. They continued to do volunteer work, Jane as a leader at Church, golf programs, and a variety of community services and Chuck as a leader at all levels in computer skill development for seniors. The computer club grew from 18 to 275 members when he stepped down as President. Chuck and Jane engaged in scholarship fund raising for a variety of employee awards projects in their Retirement Community.

Charles Leonard Lewis, 84, died at the Lancaster General Hospital Saturday, Feb. 6, 2010. On the twenty-third day of March in 2010 at the ACPA Annual Convention in Boston, Massachusetts, a memorial resolution in his honor was approved recognizing him for his many professional accomplishments.