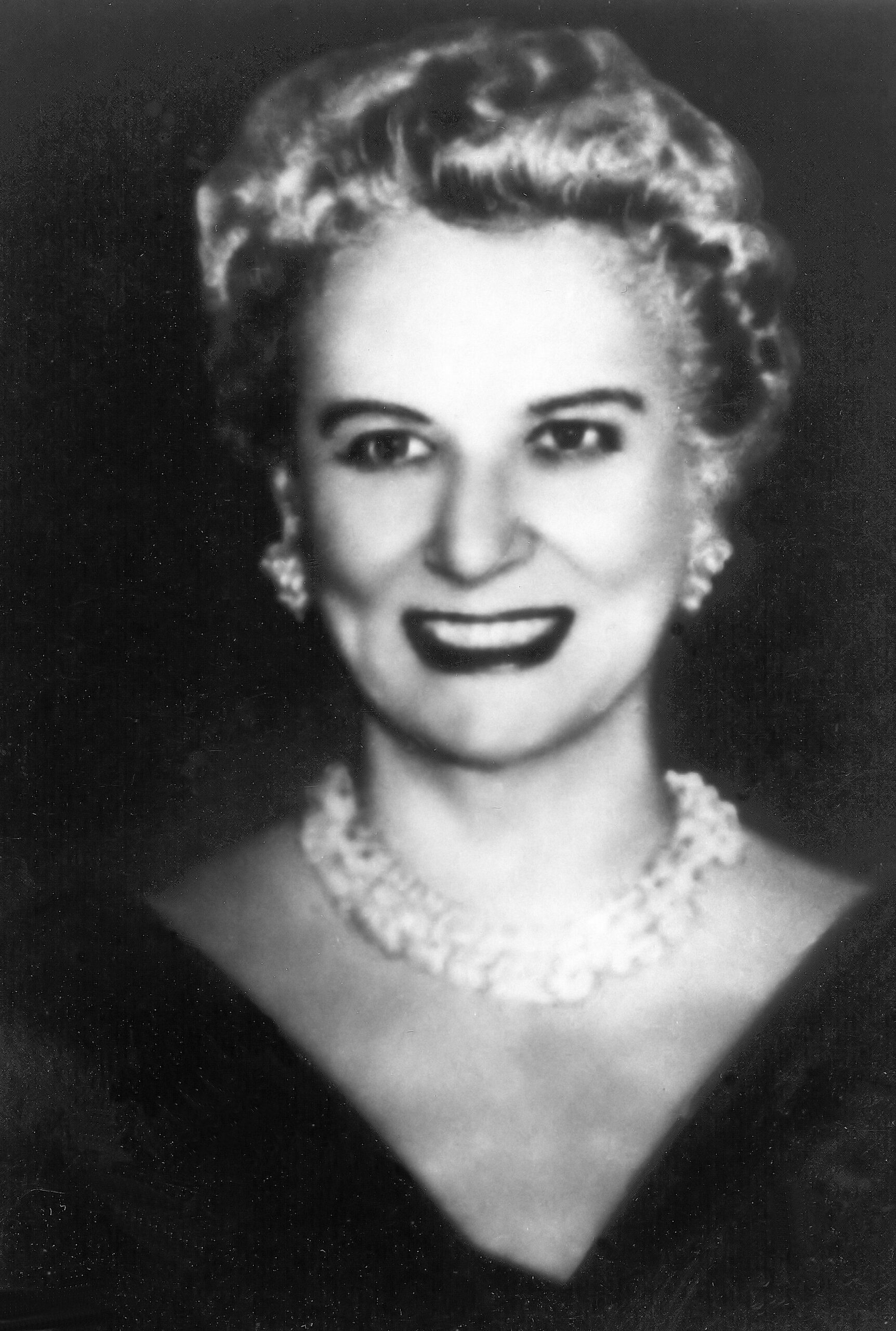 Esther Lloyd-Jones was elected unanimously as president of ACPA for a two-year term at the Business session in Atlantic City on February 22, 1935. She was Assistant Professor of Education and an instruc­tor in the Department of Student Personnel Admini­stration at TC, where she received her Ph.D. degree in 1929. Also, she was Director of the Guidance Labora­tory where she and her colleagues worked on tech­niques for understanding people of all ages. She was married and the mother of two children.

A Teachers College Fellow at Columbia Univer­sity (TC) in the summer of 1923, TC awarded her a full scholarship for 1923-24. She received her M.A. (1924) and Ph.D. (1929) degrees in personnel work. The title of her dissertation was “Student Personnel Work.” During the summer of 1926, she served as a Lecturer in Counseling at TC and joined the staff in 1928 as Instructor in the Department of Student Personnel Administration. She was named Acting Chair in 1939, and Chair in 1941. Esther Lloyd-Jones was also director of TC’s Guidance Laboratory from 1935-61. She directed several NDEA counseling and guid­ance institutes in the 1960s. She resigned with the honor of Professor Emerita in 1966 from the Colum­bia Graduate School of Human Behavior, completing a 40-year work career there. Then from 1966 to 1976, Lloyd-Jones was Distinguished Professor of Human Behavior at United States International University in San Diego.

Lloyd-Jones first became a member of ACPA during 1929, when the small organization was still called NAPPO. Her first appearance on the annual program was at Atlantic City in 1930. She chaired the Editorial Committee during 1931-32. At the annual Business session in Washington, DC on February 18, 1932, Walters appointed her to chair a committee of three to see how many reports of the annual meeting could be published with available funds. He re­quested her both to serve on the Program Committee for the annual conference held in Minneapolis in1933 and serve as a member of the General Committee on College Personnel Principles, Functions, and Stan­dards during 1932-33. The report of the Nomi­nating Committee ac­cepted by vote of those in attendance at the annual Business session in Min­neapolis on February 25, 1933, listed Lloyd-Jones as secretary, the seventh person to hold that office. She was re-elected secre­tary the following year at the Cleveland conference. Also, she was an ACPA representative on the ACGPA Execu­tive Committee from 1934 through the 1937 conference in New Orleans, and she was the representative on the ACGPA Coordination Committee during 1936-37. Dur­ing the second morning of the 1935 conference, Lloyd-Jones was a discussant at the Personal Counseling section meeting.

The thirteenth annual ACPA conference took place Wednesday through Saturday, February 19-22, 1936, at St. Louis. The Coronado Hotel was ACPA headquar­ters. Registration fees amounted to $8.00. The program policy for the meetings, in conj unction with ACGPA, was similar to that followed during the preceding year. Each of the five vice-presidents chaired the program of his / her division. The Teacher Placement session was held last as usual so that people who came for the meetings of the Department of Superintendence of NEA would have an opportunity to attend.

On opening day, Lloyd-Jones and other ACPA members attended the ACGPA joint luncheon, and they were present for the second annual open meeting of the cooperating organizations that afternoon. She presided at the annual ACGPA dinner. The subject of the address given by a college president was “Personnel Work-Adjunct or Education Itself?”

At the annual ACPA Business session held in the Coronado Hotel on Thursday, February 20, Esther Lloyd-Jones presided and reported the progress of ACPA during the past year. One significant part of the financial report indicated that there were 140 paid members during the 1935-36 membership year. Mem­bers at the meeting decided to charge a convention fee of $1.00. After the presentation of the ACGPA Coor­dination Committee report, ACPA members decided to remain a cooperating organization, and they re­quested that ACGPA continue its three committees on research, publications, and coordination. Near the end of October 1935, ACPA contributed $50.00 to the common pool of funds which enabled ACGPA to carry out its activities.

The fourteenth annual ACPA conference was held in New Orleans, Wednesday through Saturday, February 17-20, 1937, jointly with other members and affiliate organizations of ACGPA. Formal ses­sions took place at the St. Charles Hotel headquar­ters for ACPA. Sixty-two people registered and paid their $1.00 fees. The program policy used was similar to the preceding year. After the Wednesday morning session on Records and Research in Room A of the St. Charles, Esther Lloyd-Jones and the ACPA members attended the ACGPA joint luncheon, the annual open meeting was held at which time reports of ACGPA activities for the past year were given. Discussion groups then went into session. Lloyd-Jones and several other ACPA people spoke at ACGPA’s group meetings. No scheduled joint ACGPA meetings were held on Thursday. The annual ACPA dinner was held Thursday night at La Louisiana restaurant, and President Lloyd-Jones spoke on the topic “What Is This Thing Called Personnel Work?” The ACGPA or­ganizations held two Joint sessions Friday, a morning meeting at the Jerusalem Temple and a night session at the St. Charles Hotel. The night meeting was followed by a pageant and reception at the Cabildo. A program Saturday morning at the St. Charles con­cluded the fourteenth annual ACPA conference.

President Lloyd-Jones presided at the annual ACPA Business meeting held Thursday afternoon at the St. Charles Hotel. The constitution was revised in accordance with the opinion expressed through a mail survey of the membership conducted by the Constitution Revision Committee during the previ­ous year. Constitutional changes were made in the membership and dues sections. The fiscal year of ACPA was declared to run from October 1 through September 30.

Lloyd-Jones presented the report of the reactions to the report by the ACPA executive committee. A joint publication proposal of the ACGPA proceedings was not approved, so ACPA decided to publish its own ab­breviated proceedings as in the past avoiding dupli­cation when possible with articles published in other journals. The president announced the new ACPA secretary, and the Research Committee chair was instructed by the executive committee to revise the membership application form. Near the close of the meeting, members in attendance voted that a com­mission of three be appointed to study the organization of ACPA and recommend changes in line with modern conceptions of personnel work.

The financial report which was prepared after the convention disclosed that ACPA membership dues were received from 180 people during 1936-37.

Esther Lloyd-Jones suggested that the ACPA program for the next two years (1937-39) should include: (1) further clarification of ACPA’s role and function in college personnel work, (2) constitutional revision in line with ACPA’s changing role and func­tion, (3) continued active cooperation with ACGPA, and (4) further attempts to draw into ACPA a greater variety of college-level personnel workers.

In May 1968, she wrote about her hopes for ACPA: “I would like to see the higher education group stay with elementary, secondary and adult guid­ance-personnel divisions in APGA. Members of ACPA are increasingly intolerant of ASCA, NVGA, etc. They tend more and more to concentrate on the institu­tional level exclusively and lose the developmental point of view.”

She is the recipient of many honors and awards for her professional achievements and community services. In Atlanta (1975) at the request of ACPA President Harold Grant, one of her former students at TC, she spoke on behalf of all the ACPA past-presi­dents at the opening Banquet, which celebrated completion of the association’s first 50 years. At the ACPA Luncheon during the national ACPA conven­tion at Denver (1977), President Anne Pruitt pre­sented her the Outstanding Professional Service Award and a cash amount given in her name to the Pratt Institute in Brooklyn, New York, where she had been a Trustee.

An Esther Lloyd-Jones Symposium: The Role of Education in the Teaching of Values was con­ducted in her honor at The University of Georgia Center for Continuing Education during June 6-8, 1979. The conference was a tribute to her as mentor and an influence for many of the administrators, teachers, and counselors in schools and colleges across the country. Also, the meeting acknowledged her commitments to values and questions having to do with values education, areas in which she had done considerable research and writing.

A key figure in building the guidance and student personnel field in the United States, she was the author, co-author, or co-editor of 18 books and numerous articles. Among the seven honorary doctorates she received was a Doctor of Laws degree (1955) from Elmira College and a Doctor of Science in Education degree (1961) from Boston University.  She died on November 25, 1991 at her home in Millbrook, NY when she was 90 years old.  She was survived by a son, Donald J. of Stamford, Conn.; four grandchildren, and one great-grandchild.

An article honoring Esther McDonald Lloyd-Jones was published in ACPA Developments in January 1992.