Leila V. Moore became a member of APGA/ACPA in 1964 while working at Syracuse University. Her earliest involvements were through the 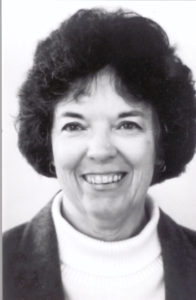 New York State Personnel and Guidance Association, where she did some volunteering for the state conference. She did not become very active in ACPA at the national level until she completed her doctorate in 1975. After earning her doctorate, Moore was an Assistant Professor of Counseling and Personnel Services at SUNY-Albany, which was a one-year appointment. This was the start of her full-time teaching career, and was also the start of her involvement in ACPA. Moore joined Commission 12, now the Commission for Professional Preparation and in 1979 Moore was elected to the Directorate Body of that commission. Moore was actively involved in ACPA from 1979 through the present, holding roles such as the Director of two Core Councils, member of the Editorial Board of the Journal of College Student Development, Vice President for Commissions, President of the association, and President of the ACPA Foundation.
A significant turning point in Moore’s involvement with ACPA occurred when she participated in her first mid-year leadership meeting in October, 1981. At that meeting, Phyllis Mable, Dick Stimson, Jim Kubik and Moore presented a white paper: Philosophical/practical rationale for the American College Personnel Association (1) continuing a relationship with the American Personnel and Guidance Association, and (2) becoming a separate association. This report was only one of the many times when ACPA gave serious consideration to becoming a separate organization. After that presentation, Moore knew that her focus as a professional would be within ACPA. She was already enjoying the leadership roles in ACPA, and had already formed lifelong friendships with many others in the field. Each new opportunity within ACPA was challenging and exciting, and Moore felt deeply involved and of course, deeply loyal to the association.

Moore attended nearly every Annual Convention since becoming active in Commission 12 in the late seventies. She has been on nearly half a dozen convention planning teams and has been a volunteer at registration and the placement center on numerous occasions. Moore presented at nearly every ACPA convention and often at state division conferences or for professional development meetings at her institution between 1976 and 1993. During those years Moore concentrated on leadership development, multicultural competencies, conflict management, cross cultural communication, professional competencies for student affairs practitioners, organizational development, career mobility of student affairs professionals, and adult student needs and learning styles. After becoming President, Moore’s presentations tended to be keynote addresses or other speaking engagements rather than workshops.

Shortly after Moore learned of her election as President-Elect, she learned that the vote to disaffiliate from ACA would be put to the ACPA membership for the seventh time in history. Soon after that, the results of the vote were announced, and ACPA would disaffiliate. Therefore, Moore’s presidency (as were the presidencies of Bob Brown and Betty Fitzgerald before and Terry Williams, Barbara Anderson and Harold Cheatham after) was marked by the activities of separating from the American Counseling Association. Terry Williams and Moore made an agreement that they would serve as co-presidents in terms of making decisions about the separation, so that the membership would not feel any bumps as Moore finished her term and Williams began his. So, on Moore’s watch, ACPA celebrated the separation from ACA in San Francisco at the annual conference by announcing the appointment of ACPA’s first Executive Director, Malcolm van Deursen. The search, selection and contract negotiations process for Malcolm took place just before the convention. Also during Moore’s presidency ACPA identified the need to have an office at One Dupont Circle, and began negotiations with the American Association of Higher Education (AAHE) to sublet space from them. The ribbon cutting for the new space took place under Terry William’s presidency. The terms and conditions of ACPA’s separation from ACA were developed on Moore’s watch and finalized after Williams began his term. With wonderful assistance from a good colleague, Audrey Remley, ACPA was able to complete the separation of financial records and recover copies of our journals from the ACA warehouse. All of our “stuff” traveled from the ACA office to Moore’s basement or to the newly opened office at One Dupont Circle.

Moore is proud of the fact that ACPA was able to complete our separation from ACA without rancor. With Audrey Remley and others, we met with the leadership and Executive Director of ACA to finalize the separation and agree on the financial separation in particular. We also made a graceful exit from the ACA Governing Board. Moore recalls going to the ACA Governing Board meeting during their convention to announce the separation and to formally withdraw our organization from the Governing Board. Good colleagues such as Cynthia Johnson had helped to pave the way for the smooth transition. Moore recalls standing up to leave the Governing Board meeting after bidding farewell, and found that she was looking back at a room full of colleagues who took the time to wish ACPA well. It was a moment in time she’ll never forget.

Another unforgettable moment for Moore was presiding at the ACPA business meeting at the San Francisco Annual Convention, and fielding more and more questions about our separation from ACA. Many were just beginning to realize the implications of the decision, and there were a number of people who were still concerned that we would be giving up our identity as counselors. Many of the leaders of the Executive Council were responding to questions from members and calming fears that we would be losing our core identity. Everyone was getting tired, and the meeting had gone overtime. A member stood to ask her question, which went something like this: “With all the changes we’re going through now as an independent organization, isn’t it time to think about changing our name?” Moore responded immediately: “Not on my watch!” The meeting ended shortly after that, with those in the room standing to give the Executive Council a round of applause. It was a good moment.

Disaffiliation and becoming an independent organization was the marker of Moore’s presidency. Related issues included what the organizational governance should look like, getting used to being financially independent, getting used to sharing authority and responsibility for leading the Association with the first Executive Director, and resisting the temptation to change our name.

Following her presidency, Moore served at Penn State University as Director of the Hetzel Union Building and Kern Graduate Commons until 1995, when she was appointed Vice President for Student Affairs at the University of New Hampshire. When she retired from that position in 2002 she agreed to serve as President of the ACPA Educational Leadership Foundation, and for the last nine years has participated in leadership roles with the Foundation. In March 2005 Moore joined William Spelman Executive Search where she is currently a Vice President.