Catherine M. Northrup was the sixth woman presi­dent of ACPA. She was elected president-elect in 1957, near the completion of a two-year 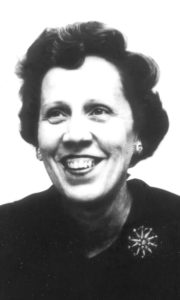 term as secretary-treasurer. She was Associate Dean of Students for Women at Washington State University, Pullman.

Born and reared in Denver, Colorado, Catherine Northrup graduated from that city’s North High School in 1926. During the summers of 1925, 1926, and 1933 she was a camp counselor. She was an x-ray techni­cian before she enrolled in the fall of 1929 at the University of Colorado, Boulder. She was awarded an assistantship in psychology during her senior year and awarded the B.A. degree (1933. Psychology, Soci­ology, Biology). Employed in the Monte Vista (Colo­rado) schools as an elementary teacher during 1934-37, she then accepted an appointment at Colorado State University at Fort Collins, where she taught psychology and education until 1941. Subsequently, she was appointed the Assistant Director of Student Personnel in charge of the counseling and the testing program (1942-46), Assistant Dean of Students (1946-47), and Associate Dean of Students and Counselor for Women (1947-January 1950). Meanwhile, she was promoted from Instructor (1937-41) to Assistant Pro­fessor (1941-43) and to the Associate Professor of psychology (1943-50).

With the exception of four courses toward her master’s degree that she took at Colorado State, the other courses were taken at the University of Minnesota during the summers of 1939 through 1942 when she received her M.A. degree, majoring in the Educational Psychology, Guidance, and Counseling sequence.

At the University of Denver during the next six years, she was Assistant Dean of Students, Counselor for Women’s Activities, and Assistant Professor of Psychology (1950-52) then Associate Dean of Stu­dents (1952-56). At Washington State University, Pullman, she was Associate Dean of Students for Women (1956-60) then Dean of Women. She took early retirement from Washington State and moved to Sun City, Arizona, in August 1972. When she taught a Student Personnel Administration course at the Uni­versity of West Florida during the summer of 1977, she thoroughly enjoyed the change and opportunity to be back on a college campus and in a classroom.

Catherine Northrup first became a member of ACPA during 1944. She was a member of the ACPA Membership Committee during 1948-50. During 1952-53 she was listed as one of the eight members of the ACPA Committee to Review Editorial Policies of, and Advisory Relationships with, Student Newspa­pers. Northrup chaired the ACPA Program Com­mittee of seven members during 1954-55. At Chicago in the spring of 1955, she gave the re­port of that committee during the ACPA morn­ing Business session on Tuesday, April 5 in the Waldorf Room of the Conrad Hilton Hotel.

According to the ACPA election results early in 1955, Catherine Northrup became secretary-treasurer for two years. She was also a member of the Budget Committee during that time.

Northrup assembled in Detroit in April 1957 with 21 other ACPA members at the pre-convention work­shop to study the role and future of ACPA in higher education. She was present in her capacity as secre­tary-treasurer at the three Executive Council meet­ings and the two Business sessions. At the second ACPA Executive Council meeting, which was held on Wednesday, April 17, she reported on a luncheon meeting which included ACPA, NASPA, and NAWDC representatives who discussed plans to coordinate efforts of college personnel organizations. Her motion that a Constitution Revision Committee be formed to incorporate provisions of the workshop report was passed unanimously at that meeting and her Budget Committee report as amended with minor corrections was accepted. (The P-O-G proposed budget for 1957-58 was $1,500.)

In addition to her responsibilities as president-elect of ACPA during 1957-58, President Kamm appointed her to chair the five-member special Committee on Committees to evaluate the entire ACPA committee structure and organization. Also, she continued to chair the Budget Committee. Early in October 1957, she met with the president and other ACPA Executive Council members in St. Louis to continue preparation for the 1958 convention.

and two Business sessions. At the First Executive Council meeting on Sunday evening, March 30, Northrup reported for the Committees. President Kamm announced that Northrup was one of five ACPA repre­sentatives who were meeting with AACRAO, NASPA, and NAWDC to discuss further plans for cooperation during the convention. At the ACPA luncheon on Monday, March 31, prior to the first Business session, Northrup was one of the 15 people, including ACPA President Kamm’s wife, who sat at the head table. Northrup presided at the second business session on Wednesday, when she substituted for President Kamm about midway through the session. Also she presided at the third Executive Council meeting held on Thurs­day, April 3.

During her presidential term (1958-59), Northrup adhered to the recommendations she made with her report of the Committee on Committees at Detroit. She appointed ACPA members to four standing commit­tees and five special committees. As president, Northrup served as an ex officio member of the Program Com­mittee, she chaired the Budget Committee, and she was a representative of ACPA on the APGA Executive Council.

On Thursday and Friday, October 9-10, 1958, President Northrup was one of six ACPA members who served as official delegates at the ACE meetings in Chicago. Also, she took time to discuss with her ACPA colleagues some of the issues which concerned ACPA. On Sunday and Monday, October 19-20, she and the president-elect attended the APGA Executive Council meetings in Cleveland. In October, Northrup visited the APGA headquarters office at 1534 “O” Street in Washington, DC.

A major ACPA activity that took place during 1958 was the work of the Constitution Revision Committee members, who were authorized to revise and rewrite the ACPA Constitution and By-laws. As a result of the membership vote, the new ACPA By-laws were adopted on November 21, 1958, and membership qualifica­tions for joining ACPA included all college personnel workers regardless of title. (The rewritten constitution was used for many years.) As of January 31, 1959, ACPA membership was 2,015.

The thirty-second national ACPA convention (the seventh as a Division of APGA) took place at Cleveland, Monday through Thursday, March 23-26, 1959. The convention was held at the Sheraton-Cleveland and Hollenden Hotels. The APGA common theme was “Community Planning for Human Development.” Most of the ACPA committees met on Sunday afternoon and Monday morning. No distinction was made between the 55 general and special interest sessions. At the ACPA luncheon on Monday, special guests recognized at the guest table were five past-presidents: Lloyd-Jones, Wrenn, Anderson, Pepinsky, and Blaesser. Special guests from other college student personnel organizations were present, also. Following the lunch­eon, President Northrup presented a plaque to past-president Robert B. Kamm (seated at the head table) “in grateful appreciation for leadership and service to the American College Personnel Association and to the profession of student personnel work.”

At the Business session on Monday, she presented the “1959 ACPA President’s Report.” At the close of the second Business session, the members present stood up and applauded her for her services to ACPA.

In a letter dated May 23, 1974, she stated: “As I look back on those years in ACPA I believe that the best contribution that I made was that the constitution was rewritten and was used for many years.”

In May 1978, Catherine Northrup’s hopes for ACPA were: “Continue and expand contacts with related pro­fessional organizations that are a part of Student Personnel services. Speak out on issues concerning higher education independently as well as through APGA.”

She was state president of women deans and counselors in Colorado and Washington, and during 1970-71 she was President of NAWDC, the first of three ACPA presidents to hold that office.

Catherine Northrup sold her house in 1989 and moved to her new Life Care home in Peoria, Arizona. After she retired, she received satisfaction from volunteer work at the hospital where she was a member of the Hospital Board for 12 years. She died in Peoria, AZ on May 8, 2005 at the age of 96.