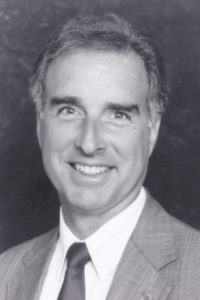 Pennsylvania. Oliaro’s early involvement with ACPA came through Commission III, now the Commission for Housing and Residential Life, in which he served on the directorate and presented at the Annual Convention. Additionally, Oliaro was involved in the Michigan College Personnel Association while studying and working at Michigan State University. He has been an active ACPA member before, during, and after his presidency serving the association in such roles as major speakers chair for several Annual Conventions, member-at-large on the Executive Council, Fund Management Group chair, and most recently, trustee, vice president, and president of the ACPA Foundation Board.

Similar to many other colleagues who have served as ACPA president, Oliaro tried to avoid a nomination to run for the presidency on several occasions before finally agreeing to being nominated. It was Jean Paratore and Lynn Willett who eventually persuaded him to run; however, he did so only with the understanding that they, as ACPA leaders who had also given much to the Association and had earned the respect of their colleagues, would also be willing to run in subsequent years – if, in fact, Oliaro was elected. Much to everyone’s surprise, Oliaro did receive the honor of being elected as President of ACPA for the 1996-97 year. Subsequently, both Jean Paratore and Lynn Willett fulfilled their promise to run and they were also elected by the membership to serve as Presidents in 1997-1998 and 1998-1999 respectively.

The purpose in that agreement was to create some continuity and extended support for moving the Association forward in a manner consistent with ACPA’s goals and strategic plan. In fact, Oliaro’s presidential address was highlighted by a theme that suggested that he was not going to introduce any “new goals” or any “new ideas”. Although it was in part tongue-in-cheek, he felt that continuity would be important because the Association had just hired a new Executive Director, was in the early stages of implementing our strategic plan, and was getting ready for the decennial joint conference with NASPA colleagues.

Oliaro’s platform was that he did not intend to establish new goals that were unique to his personal agenda or personal ambition to make a mark on the Association. Rather, he wanted to build on the legacy of esteemed predecessors who had served as presidents of ACPA. He wanted to continue the work of implementing the strategic plan and help ACPA become a more “learning oriented” organization as we tried to live the philosophy of the Student Learning Imperative that was introduced in 1994. Oliaro also wanted to put students more in the forefront of ACPA. That is why he asked a student to introduce him when he gave his incoming Presidential Address in Baltimore at the 1996 convention. This was the first time a student had been asked to do this.

Oliaro would like to think that one of the highlights of his presidency was also a very functional and collaborative Executive Council that functioned to serve constituents effectively and in a financially responsible way with a balanced budget.

Oliaro worked collaboratively with Suzanne Gordon, President of NASPA, and together, put together an outstanding 1997 Convention Planning Team that was headed by Jill Carnaghi and Susie Batchelor. It was a group that lived up to the charge to ensure that the convention served our profession first and not just the individual associations. The convention was held in Chicago and attendance was the most of any convention up to that point – over 7,200. It was well-run, positively evaluated by participants, and financially rewarding for both associations.

In keeping with his “student focus”, this was the first ACPA convention that invited students to participate as a special cohort. They were sponsored by Oliaro and other colleagues and were the guest speakers at a panel presentation during the convention. In that panel presentation, they shared their observations about “our colleagues observations about students” that were offered in the convention sessions that they attended. This pilot project led the way for the “Next Generation” student project which has became a fixture in ACPA conventions.

Another highlight of his presidency and the convention was the introduction of the “Principles of Good Practice for Student Affairs” document. This was a product of a joint charge given by Suzanne Gordon and Oliaro to a committee of NASPA and ACPA professionals, headed by Greg Blimling and Elizabeth Whitt. This document was unveiled at the convention and was subsequently made into a book. In addition, an inventory was developed by a separate group made up of Greg Roberts, Karl Beeler, Susan Salvador, and Oliaro. The inventory was distributed along with the “Principles of Good Practice for Student Affairs” document. The inventory served as a checklist for practitioners to implement the document on their campuses.

Subsequent to his presidency, Oliaro accepted an appointment to the ACPA Foundation Board. He served as Vice President of the Board for 2 years and as President for 2 years. During that time, the Foundation introduced the ACPA Foundation Grant Program, continued the Diamond Honoree Program, and worked hard to develop improved corporate relationships with business partners. This subsequently led to increased participation by partners as trustees on the Foundation Board, a practice that continues today.

Oliaro continued to serve as Vice President for Student Affairs at West Chester University until 2002. Since that time, he has served as Vice President for Student Affairs at California State University, Fresno. It has been a rich and rewarding experience and afforded him the opportunity to serve in multiple roles at different times over the past decade, to include supervisor of Information Technology Services, a stint as Athletics Director, and most recently, to serve as Chair of the 10-year NCAA Certification Process to reaccredit the Division I Athletics Program at his institution.

Oliaro is truly grateful for the contributions that ACPA has made to his professional development, and to his insight and understanding of students and the Student Affairs profession. ACPA has been the source of many extraordinary professional experiences that he has been able to enjoy throughout his 39 year career for which Oliaro write, “I will always be indebted.”