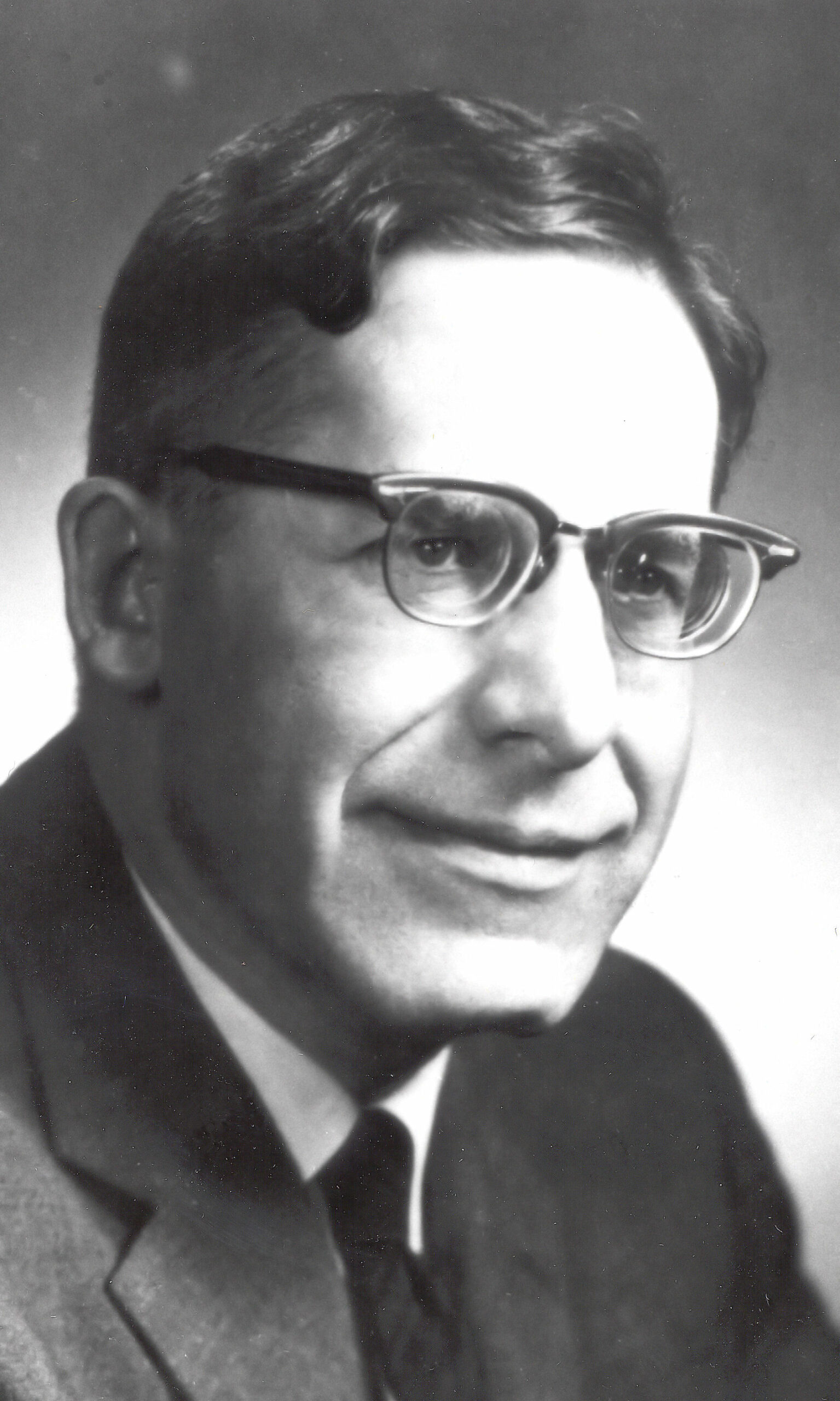 Harold B. Pepinsky, the eleventh man to become president of ACPA, was the first ACPA president to serve the prior year as president-elect. He assumed the presidency for a one-year term at the close of the 1955 convention in Chicago. He was an Associate Professor in the Department of Psychology. Director of Research, Occupational Opportunities Service (a campus counseling and research agency), a Consult­ant in the Operations Research Office, and a Faculty Representative on the Council on Student Affairs at Ohio State University. He was the author or co-author of approximately 20 texts, monographs, and profes­sional articles at the time he became president-elect in 1954. He was 37 years old, married, and father of one child.

Born in St. Paul, Minnesota, Harold Pepinsky gradu­ated from University of Minnesota (UM) High School in 1934, co-valedictorian of his class. During the next 10 years, he worked and studied at UM. Music critic for the UM Minnesota Dally during 1937-40, Pepinsky was a Teaching Assistant in the Department of Psy­chology during 1938-39, Counseling, Research, and Teaching Assistant in the General College (1939-42), Instructor for the Department of Educational Psychol­ogy during the summer of 1942, and Administrative Fellow in the office of the Dean of Students (1942-44). He received his B.A. degree cum laude in 1938 major­ing in Psychology with minors in Music and Sociology. He was awarded the M.S. degree in 1940 with a Psychology major and Social Work minor. In 1942 he was awarded the Coffman Memorial Scholarship as he continued to complete coursework for the Ph.D. de­gree, which was granted to him in 1946. His major was Educational Psychology; the minor was Psychology.

Pepinsky’s professional career of 34 years at the Ohio State University (OSU) began in 1951. For 11 years he was Director of Research at the University Counseling and Testing
Center. Appointed ini­tially as an Associate Professor, he was pro­moted to full Professor in 1956. His first Ph.D. advisee at OSU was Kathryn Hopwood, who later became president of ACPA. Now the roles are reversed, and she is considered a member of his extended family. He retired early from OSU in 1985, taught part-time in the spring of 1986 and 1987, and   team taught an honors course and he maintained a small private practice.

Harold Pepinsky first joined ACPA in 1944. He was a member of the ACPA Publications Committee during 1946-47, a member of the Research Committee during 1948-53, and a member of the first APGA Research Committee during 1951-54. He chaired that commit­tee during 1951-52. At a joint ACPA/NVGA meeting listed as Group Techniques in the Student Personnel program at the 1949 CGPA convention in Chicago, Pepinsky read a paper titled “An Experimental Ap­proach to Group Therapy in a Counseling Center.” At Chicago in 1951 during the annual CGPA convention, he received the “Highest Award” for “the most out­standing research in Student Personnel Work, for the period June 1946-July 1949.” He was elected to the ACPA Executive Council for 1952-53, and he was re-elected to serve another one-year term during 1953-54.

During the first APGA convention at Chicago in 1953, Harold B. Pepinsky presided at a Tuesday morning ACPA section meeting titled New Frontiers in Personnel Research. At a Wednesday afternoon sec­tion meeting titled “Recently Formulated Theories of Occupational Choice,” he was the third speaker. The topic of his paper was “Productive Behavior.” He participated in both ACPA Executive Council meetings held at that annual convention.

He served on the ACPA Convention Program Com­mittee during 1953-54, and at Buffalo in 1954 he read a paper on “Productive Behavior” (a continuation of research over the past year) at a Tuesday morning section meeting labeled “Implications of Research in Interpersonal Relations for Student Personnel Work.” The next afternoon, he presided at a symposium of free speakers who talked about phases of Professional Ethics of College Personnel Workers.

Upon his election as president-elect during 1954-55, Pepinsky served as a vice-president for ACPA and as a representative on the APGA Executive Council. He attended the two-day APGA Executive Council meet­ing in October at Chicago with President Anderson, and Pepinsky was an ex-officio member of the 1955 ACPA convention Program Committee.

At the Chicago meetings in 1955, he was scheduled to attend the APGA Executive Council meetings begin­ning Sunday morning, April 3, and the ACPA Execu­tive Council meeting Sunday evening. Another APGA Executive Council meeting was held Monday night at 8:00 p.m. The next afternoon, Tuesday, April 5, he presided at the APGA Publications Committee open meeting. On Thursday morning, April 7, President­-elect Pepinsky presided at the second ACPA Business session (Policy Planning session) of the convention. Out of the total ACPA proposed budget of $1,925.00 for 1955-56, $1,300.00 was allotted for publication of the P-O-G.

Upon the resignation (after three and one-half years) of P-O-G editor Les Martin of the University of Kentucky, Pepinsky appointed Joe Norton of Alfred University as the new editor. Besides the regular Committees on Budget, International Relations, Joint Committee on Student Discipline, Membership, Nominations, Professional Standards and Training, Program, Publications and Research, and Student Eligibility for Co-Curricular Activities, President Pep­insky appointed three additional committees which he said were suggested to him through letters and com­ments at the 1955 convention in Chicago. Those three Committees were (1) Grass Roots Development, (2) Higher Education Planning, and (3) Policy and Plan­ning.

The function of the new Grass Roots Development Committee was to review what was happening in the formation of ACPA branch structure and recommend what should be done about ACPA’s role in stimulating and developing branch programs. The Higher Educa­tion Committee members were instructed to deter­mine how student personnel workers in general and ACPA members in particular could best deal with increasing enrollment in higher education. The Policy and Planning Committee task was to review the struc­ture and function of ACPA and suggest recommenda­tions for the future. Pepinsky reported to the members in the fall of 1955 that plans of the Program Committee were to have convention reports from two of the committees at the Washington, DC convention in 1956. Pepinsky served on the ACPA Program Commit­tee during 1955-56.

The 1956 ACPA annual convention, the fourth in conjunction with the other Divisions of APGA, was held Sunday through Thursday, March 25-29, at the Shoreham and Sheraton-Park Hotels in Washington, DC. Among the 2,106 registrants at the APGA national convention, ACPA registration totaled 590.

Throughout the five-day ACPA program were five general sessions (one joint session with NVGA), nine discussion group sessions, 15 special interest ses­sions (including two joint sessions—one with SPATE and another with ASCA and SPATE), two Executive Council meetings, and a general Business session.

President Harold B. Pepinsky attended the APGA Executive Council meeting which began Sunday morning. That session was the first of several APGA programs he attended at the Washington, DC meet­ings. He presided at the first ACPA Executive Council meeting on Sunday evening and another on Thursday afternoon. President Pepinsky spoke at the ACPA luncheon meeting on Monday, March 26. The title of his presidential address was billed as “Productivity in the Universe” but submitted by him as “Productivity in the University.” On Monday afternoon at a special interest session labeled Positive Conceptions of Ad­justment, Pepinsky chaired a symposium of two pre­senters. He presided at the ACPA Business session held Tuesday morning. The ACPA membership rolls for 1955-56 included approximately 1,631 names.

During his professional life, Harold Pepinsky presented several hundred papers and invited addresses at national and regional conferences of professional associations. His publications include over 100 articles, 10 books and monographs, and a dozen technical reports. Married to Pauline Nichols, a fellow graduate student at UM, they co-wrote Counseling: Theory and Practice (1954), a major work in the counseling field. He died in Columbus, OH on August 4, 1998.