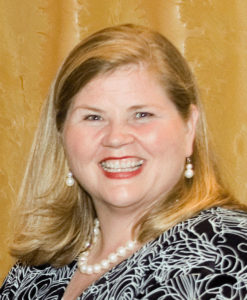 in 2008. Perillo became involved with ACPA through Commission XVIII, now known as the Commission on Alcohol and Other Drug Issues. This was an important starting point for Perillo since she had decided to focus her dissertation research on college student drinking behaviors and its impact on learning. Perillo knew colleagues in this Commission could teach her a great deal. And, they did! Although a member of ACPA since the mid-1980’s she did not get actively involved until the early 1990’s. While being involved she got to know other ACPA leaders and was most impressed with their loyalty and commitment to the organization. During one Summer Leadership Meeting, while serving as chair of Commission XVIII directorate, Perillo got to know Jill Carnaghi, another ACPA Past President, who invited Perillo to serve on her convention planning team. There is no doubt that getting to know other colleagues on the team and coming to learn more about the association committed Perillo to continue to serve. In fact, she served on ACPA convention planning teams in 1999, 2000, and 2001. Perillo has been an active member of ACPA for over 20 years and has been involved in many ways. Her most significant engagement has been through her service in the following ways: ACPA President, Chair of the ACPA Governance Review Task Force, Chair of the ACPA Governance Implementation Team, Chair of the Commission for Alcohol and Other Drug Issues, and the ACPA/NASPA Professional Competencies Committee.

Perillo’s presidency began as ACPA finalized and disseminated its new strategic plan for 2008-2013 and strengthened its partnership with the ACPA Foundation. Additionally, Perillo led the organization through an effective governance transition and, in partnership with NASPA, appointed the Task Force for the Future of the Profession. Other significant committees created by Perillo were the Placement Review Team, the Placement

Implementation Team, the Convention Review Committee, and the Recruitment and Retention Committee. Perillo also supported and approved the acquisition of a digital blueprint to improve ACPA technologies, served as an effective and thoughtful financial steward during one of the most difficult economic times in the history of our country, and commissioned a benchmarking report for corporate sponsorships.

In order to accomplish so much during her presidency, Perillo communicated regularly and directly with all ACPA leaders, not just Board members, strengthened and clarified Board roles and responsibilities, and enhanced and improved training and orientation for all ACPA leaders. Additionally, she supported the creation of The Higher Education Mental Health Alliance and developed a member recruitment tool for conventions via a new Involvement Headquarters. Despite the many great successes Perillo accomplished, there were many pressures. She wrote,

“There is no doubt that the single greatest pressure during my presidency was our world economy. Given the new governance structure, a new strategic plan, and a more oriented and trained ACPA leadership, our Board and Assembly Coordinators were positioned to move boldly into the future. Given the recession and economic downturn, we had to temper every new initiative with financial realities.”

Since her presidency Perillo has continued to serve ACPA via the ACPA/NASPA Consolidation Steering Team, ACPA 2011 Convention Chair, and serving as Faculty-Lead for the Donna M. Bourassa Mid-Level Management Institute. She feels strongly that she has found her professional involvement home in the Bourassa Institute since mentoring mid-level professionals is a professional and personal joy. Perillo also has never felt more proud to be an ACPA member than now. While ACPA and NASPA did not consolidate, she was honored to serve and learn even more about both associations up-close. And, she can honestly say, that throughout the entire process, ACPA continued to focus on the profession, lead with and from its values, listen to its members – all of its members – and never wavered from doing the right thing. Value-centered organizations are few and far between and ACPA truly rose above during this process.

In her free time, Patty most enjoys spending time with her wonderful family and close community of friends and enjoys the arts, athletic events, prayer/reflection, reading, and entertaining. Since serving as ACPA President, Patty Perillo left Davidson College to serve as the Vice President of Student Affairs and Assistant Professor of Higher Education at Virginia Tech, and begins her employment in January 2020 as the Vice President of Student Affairs at the University of Maryland at College Park.