The official announcement of E.G. Williamson’s election to the presidency of ACPA was made at the first Business session at the Atlantic City 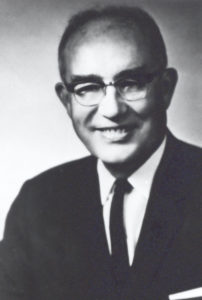 convention on Thursday, February 20, 1941, nearly ten months before the outbreak of World War II. At that time he was Coordinator of SPW and Associate Professor of Psychology at the University of Minnesota. Soon there­after he became Dean of Students managing a variety of services including the newly designated Counseling Bureau which he had organized as the Testing Bureau in 1932, the year after he received his doctorate under D.G. Paterson and after he had served six years as Secretary of the Faculty Counselors Committee of the College of SLA. He was then 40 years and married to Lorraine Fitch with two children. A third child, his second daughter, came in 1946.

Williamson’s birthplace was Rossville, Illinois, where he attended the local schools and was employed as a barber during 1913-20. A graduate of the University of Illinois (1925, B.A., Psychology), he said that he stumbled into counseling by accident. A Methodist bishop sent a telegram recommending him for a job in Minneapolis at the time when Jobs were not very frequent. The $2,000 looked like a tremendous salary to him for working with Methodist men’s groups. He continued his studies at the University of Minnesota (UM). In 1926 he became an assistant to Paterson in testing and counseling. Williamson’s Ph.D. completed in 1931 was titled “Counseling College Students in the College of Science, Literature, and the Arts, University of Minnesota: A Study of Methods, Types of Student Difficulties, and Results.”

In 1930 Williamson became a faculty member in the Department of Psychology as Assistant Professor, Associate Professor (1938), and Professor (1941). He was Coordinator of student Personnel Services from 1938-41. When the office of Dean of Students was established, he was named to fill the position, during the next 28 years as Dean; Williamson kept in touch with students and established an international repu­tation at his professional home as he developed the trait-and-factor counseling approach and the Minne­sota Point of View.

In the preceding years, as later, he published papers on concepts, research, and organized pro­grams about various aspects of the profession. Also, he had attended several informal meetings of repre­sentatives of the then existing guidance organizations which later, at Dan Feder’s instigation, became organ­ized as APGA.

Williamson’s first membership in ACPA was during 1936-37. He began to participate in the an­nual Business sessions and served on the Re­search Committee dur­ing 1937-38 and the Nominating Committee in 1938. Beginning in 1938 at Atlantic City, he presented papers at the national ACPA meetings. His topic at the Research program presentation in 1938 was “A Summary of Research Studies in Evaluation of Guidance.” At the Cleveland meetings in 1939, he spoke on “Coordina­tion of Decentralized Personnel Services” before a joint session of ACPA and NADW members. At the St. Louis convention in 1940, when he was elected a member-at-large for a year, Williamson chaired a panel discus­sion on the Future of Student Personnel Work before a joint session of ACGPA organizations.

World War II added difficulties beyond the norm for the program planners arranging the 1942 convention in San Francisco, but the nineteenth annual ACPA meeting was held again in conjunction with other CGPA organizations. CGPA financed the printing of the convention programs. ACPA headquarters was the Mark Hopkins Hotel. Registrations numbered 179. Williamson presided at a CGPA luncheon meeting on Wednesday, February 18. He led a general discussion on the four phases of personnel work that afternoon. The ACPA program was presented in six major ses­sions on Thursday, and Friday, February 19-20. The topic areas chosen were based on factors which con­tribute to students’ adjustment to life. Williamson was discussant at a round-table discussion at a Thursday evening section meeting at which time The Training of Professional Counselors was discussed.

President Williamson presided at the annual busi­ness session Friday afternoon. There was discussion, but no action, of affiliation with the Northwest College Personnel Association as a regional division of ACPA. Williamson announced that the proposed merger of ACPA and the Teachers College Personnel Association (TCPA) had developed to the point of ratification by the respective executive councils, but because so few TCPA members attended the San Francisco meetings, the merger was delayed. At the annual banquet on Friday evening, Williamson spoke on “The Future Develops out of the Past.” ACPA membership rolls totaled approximately 271 during 1941-42.

Williamson served on the CGPA Nominating Com­mittee which presented its slate of officers to the Board of Representatives at the second CGPA business meeting, which was held on Saturday, February 21. At that same meeting, Williamson proposed that the CPGA officers write reviews of their work and send the information by letter to the constituent members so that they would continue their contributions to the CGPA treasury to enable the coordinating organiza­tion to continue to be effective.

ACPA and other constituent members of CGPA decided at a planning committee meeting held in Chicago on Friday and Saturday, November 27-28, 1942 to forego the annual convention in 1943. The next annual convention was held in 1947.

Later in 1942, Williamson announced to the ACPA membership that their response to the Executive Council’s recommendation that they affiliate with Educational and Psychological Measurement (EPM) was almost unanimous. Williamson was on the board of cooperating editors of that journal. ACPA members received their first issue in 1942.

Dean Williamson, other officers, Executive Council members, and interested ACPA members met Friday through Monday, January 15-18, 1943 at the Hotel Biltmore in New York City for a joint work session with other CGPA groups and consultants from industry, government, and the military forces. Williamson was re-elected in 1943 to another two-year term as presi­dent of ACPA. Without restricted war travel and the curtailment of national conventions, Williamson said that he would not have had two terms as president.

During war years and during his second term as president, he found himself dividing his time between the Minnesota programs, ACPA, and war-related duties in Washington, D.C. The latter commitments included: chairing the advisory committee of U.S. Armed Forces Institute, Consultant to the War Manpower Commis­sion, ACE SPW Committee, and U.S. Veterans Ad­ministration Committee on Counseling Veterans. He also chaired the ACE special conference which issued Counseling and Post War Educational Opportunities. Many of these offices overlapped in time of occupancy. He was also elected president of Division 17 of the American Psychological Association.

When he was thus occupied, Helen Voorhees gra­ciously represented ACPA at the restricted national meetings caused by limited professional travel regula­tions during the wartime.

Helen Voorhees was kind to substitute for me (at my personal request each time) at many of the wartime meetings of represen­tatives of the guidance associations. Even though I was ACPA president I felt I had to put my Washington war obligations as first priority. I have always been deeply grateful to her for her kindness and unselfishness.

Williamson served as President of NASPA during 1966-67 and APGA during 1967-68. After 43 years a teacher, counselor, scholarly researcher, and admin­istrator, Williamson retired Dean Emeritus in 1969. Since 1926 he produced over 400 publications in more than 75 different periodicals. He authored or co-authored nearly 20 books. Among the more classical books was Student Personnel Work: An Outline of Clinical Procedures (1937, with J.G. Darley) and Student Personnel Work: A Pro­gram of Developmental Relationships (1975. with D.A. Biggs). A Fulbright international lecturer, he was a consultant and lectured at more than 200 post-secon­dary institutions.

At UM in 1976 Williamson and his wife established the Ralph F. Berdie Memorial Research Fund in memory of their eldest daughter, Janice Marie. Awarded two honorary degrees in his lifetime, Williamson was the first recipient of the ACPA Contribution to knowl­edge award during the annual convention Luncheon in Chicago (1978). Previously he had received the APGA Research Award (1953) and the Nancy C. Wimmer Award for organizing the first integrated program of student personnel services in the nation. At UM in 1977 the new underground building that housed the bookstore and admissions and records office on the Minneapolis campus was designated Williamson Hall.

E.G. Williamson commented about the future of student affairs work in an article he prepared for Presidential Reporting (1978):

After a career of forty-three years of active service, I observe that much remains to be done to integrate SPW and counseling into higher education. In many respects they remain peripheral to the main function of teaching and research. My point is clearly il­lustrated by the glaring omission of them from Clark Kerr’s Carnegie study of higher education. Long ago Hal Cowley sought to include them in the central mission of higher education—and much has been accom­plished since the 1930 decade. But more re­mains to be done if the development of individual students is to become central to high education.

E.G. Williamson was 78 years old at the time of his death, survived by his wife, Lorraine, his son, and one daughter. Williamson was recognized at the Luncheon during the ACPA national convention at Los Angeles for his many contributions to student personnel work and counseling. Memorial tributes were published in the APGA Guidepost (May 17, 1979) and ACPA Devel­opments (June 1979).