At the ACPA Business session in Columbus on Saturday morning March 29, 1947, an announcement was made that C. Gilbert Wrenn was 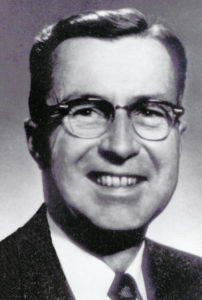 elected to a two-year term as president. At the time he was elected, he was author of more than 115 publications and was Professor of Educational Psychology at the University of Minnesota. Wrenn was several days less than 45 years of age, married, the father of a son named Robert (Ph.D. Ohio State University, 1962) and the eighth man elected to ACPA’s highest office. He was just finishing a term as president of NVGA.

Born in New Paris, Ohio, 1902, with his boyhood spent on a citrus grove in Florida, Gilbert Wrenn had two years of high school in Tarpon Springs, and then at the age of 16, went back to Ohio to work in such war plants as the Dayton-Wright Airplane Company, Chandler Automobile Works, Star Piano Company, and the Nela Research Laboratory. He attended Athens School (now Tennessee Wesleyan College) and slid into college courses there, but finished his A.B. (1962) at Williamette University, Salem, Oregon. He and Kathleen LaRaut (A.B. in Music 1924) married the day after his graduation. In 1990, they celebrated 64 happy years of marriage. Wrenn received an honorary Doctor of Letters degree from Williamette in 1952.

Gilbert Wrenn began his professional career as the Principal and Director of Guidance at Raymond (Washington) High School. After teaching together in Raymond for a year, he and Kathleen were appointed to the faculty of the Oregon Normal School (now Oregon State College of Education) at Monmouth, Kathleen as Music Instructor, Gilbert to serve as Principal of its Student Training Center in a small sawmill town in the mountains. In the fall of 1928, they moved to Palo Alto, California, and he enrolled at Stanford University where he received his A.M. (1929, Educational Psychology and Vocational Guidance, Lewis M. Terman, his adviser). Wrenn continued at Stanford for his Ph.D. (1932 in Personnel Psychology), while serving as Vocational Counselor for the Univer­sity. (E.K. Strong and W.C. Eells were his major advisors for the Ph.D.) The title of Wrenn’s dissertation was “Study of Vocational Goals and Self-Confidence Levels of 10,000 Junior College Students of High and Low Levels of Academic Ability.” He was appointed Assistant Professor at Stanford in 1932. In 1936, he left Stanford for the University of Minnesota as Assis­tant Director of General College, Assistant Director of Institutional Research, and Associate Professor. He was promoted to Professor of Educa­tional Psychology the next year.

In 1964, Wrenn moved to Arizona State University as Professor of Counseling Psychology, and became Pro­fessor Emeritus In 1972. During 1968-71, Wrenn was also Distin­guished Professor under Barclay Acheson Endowment at Macalester Col­lege and a member of their Board of Trustees from 1961 to 1971.

Wrenn first became a member of ACPA during the 1934-35 membership year, when he was Assistant Registrar for Student Personnel at Stanford Univer­sity. Beginning in 1936, Wrenn participated on the program of every ACPA convention through the year of his election in 1947. He presented “The New Student Talks Back!” at a Personal Counseling session at the St. Louis convention in 1936.

At the New Orleans convention on Thursday, Feb­ruary 18, 1937, he spoke on “The Adolescent Nature of Personnel Work.” At the ACPA Business session that afternoon, Wrenn made a motion to form a Reorganization Commission of three to study ACPA function. The members voted to appoint a commission and Wrenn was requested to be the chair. In April 1937, he attended the Washington Conference on College Personnel Work sponsored by ACE. In the Solarium room of the Chalfonte-Haddon Hall in Atlan­tic City on Thursday afternoon, February 24, 1938, Wrenn presented the proposed Charter. At the first Business session that afternoon in the Solarium room, the Charter was adopted with revisions. In the same room the night before, he chaired the section on Diagnosis.

During 1938 he served as a member on the Public­ity and Promotion committee. When each chairman of the ACPA Committee on Publicity and Promotion resigned at different times before the an­nual meetings in 1939 at Cleveland, Wrenn consented to chair the committee of one through that convention. At a Friday morning general session on February 24, he read a paper on “Recent Research on Counseling.”

During 1939-41, Wrenn served on the Program Committee. At the 1940 program in St. Louis, he chaired the Diagnosis and Counseling discussion group on the afternoon of the opening-day sessions on Wednesday, February 21. That night at a general session on Research, he read a paper on “Research and Evaluation in Personnel Work.”

In 1941 at Atlantic City, Wrenn appeared on the ACPA program three times. He was a leader of a discussion group that was concerned with the Coordi­nation of Personnel Work, he read a paper titled “Certain Industrial Research Having Implications for Student Personnel Work” at the Personnel Research section meeting, and at another section meeting spoke on “The Role of Faculty Advisers in a College Personnel Program.” At the annual Business session on Thurs­day afternoon, February 20, his name was among the five who were elected ACPA members-at-large to serve on the Executive Council during 1941-42. He was co­author of two books published in 1941, Student Per­sonnel Problems and Time on Their Hands.

At the San Francisco convention in 1942, Wrenn read one of the main papers titled “Implications of Recent Studies of College Freshmen” and later pre­sented a talk on the subject of “The Relationship of the Total Personnel Programs to the How-To-Study and Remedial Reading Programs.” The first announce­ment at the annual Business session conducted on Friday afternoon, February 20 at the Mark Hopkins Hotel in San Francisco was the results of the elections and Wrenn was elected vice-president for 1942-43.

He went on military leave from the University of Minnesota from 1942-46. Navy Lieutenant Wrenn attended the January 1943 CGPA work session and the ACPA Executive Council meeting at the Hotel Biltmore in New York City. He served again as ACPA vice-president during 1943-44 during which time he was on the staff of the Bureau of Naval Personnel at Washington, DC. At the Hotel Biltmore meeting he spoke on “Summary of Findings of 1942 Meeting with Emphasis on Changes During 1943.” He met with other ACPA Executive Council members at their annual Business session the following day at which time the group discussed at length anticipated post-war coun­seling problems.

During 1944-45 Wrenn progressed from the rank of Lieutenant to Lieutenant Commander, served in the Pacific area as a naval Personnel Officer, and was awarded the Bronze Star Medal for his service to his country. He was promoted to Commander in 1952.

During 1946-47, Wrenn was vice-president of CGPA, as well as NVGA president. He presided at the ACPA luncheon meeting on Saturday, March 29, 1947 at the Fort Hayes Hotel in Columbus. The luncheon followed the ACPA Business session at which time Wrenn’s election to the ACPA presidency was announced.

ACPA members went to Chicago in 1948 for their twenty-first annual convention, again in conjunction with the other CGPA organizations. On Monday, March 29, ACPA scheduled two general sessions and the evening banquet. Wrenn’s presidential address was “The Greatest Tragedy in College Personnel Work.” NADW members participated in a joint general session Wednesday morning, and sectional meetings with NADW and NVGA were arranged for that afternoon. That evening, a joint general session with both NADW and NVGA completed Wednesday’s schedule. The Thursday morning program included two general sessions, one with NADW. More than 600 names were on the ACPA membership rolls in 1948. Wrenn served on the CGPA Study Commission during 1948-52.

The theme of the CGPA convention at the Stevens Hotel at Chicago in April 1949 was “Achieving Com­mon Goals in Guidance.” The four-day meetings were scheduled Monday through Thursday, with Tuesday set aside as the day of common meetings with the other CGPA groups. Besides serving as presiding officer at the annual ACPA Business sessions, Wrenn chaired a general session titled “Securing Faculty Cooperation in the Student Personnel Program,” read a paper on “Student Discipline in a College,” and gave his second presidential address titled “The Fault, Dear Brutus….” This is a paper which he thought (nearly 20 years later) may have influenced the personalization of student personnel work in this country. ACPA mem­bership in 1949 was approximately 700.

In 1949, Wrenn was elected president of the Divi­sion of Counseling Psychology of the American Psy­chological Association. In 1983, he was given The Leona Tyler Award by that Division. Over the years, he served on various APA board and committees: Ameri­can Board of Examiners in Professional Psychology, Committee on Doctoral Education, Committee on Professional Ethics and Conduct, etc.

Wrenn authored or co-authored 420 texts, small books, monographs, journal articles, etc. after 1928. Various books and articles were translated into Japanese, Chinese, Korean, Hindi, Arabic Span­ish, Norwegian, Icelandic, French, and Thai. He served as Founding Editor of the Journal of Counseling Psy­chology from 1953 to 1964. In 1987 he was 1 of 12 writers honored as Distinguished Scholars by Chi Sigma Iota, international honorary fraternity in coun­seling.

In a completely different area of professional life, Wrenn served as consultant for more than 15 years to the Counseling Service in the Veterans Administra­tion Hospitals in St. Paul, Minnesota and Phoenix, Arizona. During this time Wrenn was also Psychologi­cal Consultant to the First National Bank and to Toro Manufacturing in St. Paul.

Wrenn was honored with numerous awards and citations by national professional associations in student personnel work and counseling during his long career. In 1976 APGA established the annual “Gilbert and Kathleen Wrenn Award for a Caring and Humanitarian Person” ($1,000 award). Wrenn was presented the ACPA Outstanding Contribution to Knowledge award during the national ACPA conven­tion in Denver (1977). A similar award was given to him by NASPA in 1983.

Wrenn was a guest and introduced at the opening session during the joint ACPA/NASPA convention in Chicago (1987), when the golden anniversary of “The Student Personnel Point of View” was celebrated. He was one of two living ACPA past-presidents who partici­pated in writing the statement in April 1937 at Wash­ington, DC. He wrote “Changes in Student Behavior,” a historical perspective, which was printed in the 1987 program booklet. His son, Robert, wrote the music and format for a theme song titled “Make No Little Plans” with lyrics by Kathleen. Another award recognition was unique in his experience. It was a large bronze plaque given in 1987 by the AACD Board of Directors, “A Humanitarian and Caring Persons’ Tribute to Kath­leen and C. Gilbert Wrenn.” Kathleen and Gilbert Wrenn were honored as a couple whose marriage, the inscription said, “had become a model for many oth­ers,” showing Kathleen’s strong supporting role in his professional achievements.

At the ACPA national convention in St. Louis (1990), the availability of a videotape entitled “C. Gilbert Wrenn on Student Personnel: Origins, Organizations and Outlooks” was announced for sale by the Associa­tion.

After his “retirement” in 1972, Wrenn pub­lished one full length text (The World of the Contempo­rary Counselor), co-authored 23 small books for youth, and wrote 8 invited chapters in other books, 22 journal articles, and 4 pieces of verse. Foreword and Prefaces for 3 books in psychology, edited the last 4 of a total of 43 professional texts in his Houghton Mifflin Company series in Student Personnel Work and Counseling, and served as a consulting editor for 5 books in personality development.