The ACPA membership voted Paul A. Bloland presi­dent-elect in 1969. The announcement of his election was made at the Executive Council 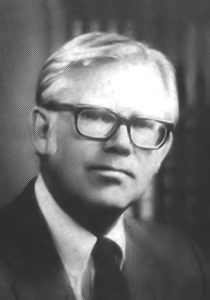 meeting in Las Vegas on Saturday morning, March 29 in North 9 of the Sahara Hotel and again during the Business session in Space Center 1 & 2 of the same hotel on March 31. Bloland was Vice-President of Student and Alumni Affairs and Professor of Education at the University of Southern California (USC). He was 45 years of age, married to Ruth Marion Nolte, and the father of two sons, Eric and Peter.

Bloland was Activities Adviser at the University of Minnesota (UM) during 1950-51. He was appointed Associate Director of the Student Activities Bureau (1953-55) then Director (1955-60) and Assistant Pro­fessor of Educational Psychology. He worked for E.G. Williamson as a department head and with C. Gilbert Wrenn as his doctoral adviser. In 1959 Bloland was granted his Ph.D. (Educational Psychology). Years later he chaired the first Gilbert and Kathleen Wrenn Humanitarian and Caring Person Award Committee (1978-77). During the national ACPA/NASPA joint convention at Chicago in 1987, he was a presenter with Wrenn at an invited session, Are We a Profession?

In 1960 he went to Drake University as Dean of Students and in 1964 took the same position at USC. In 1969 he became Vice President of Student and Alumni Affairs and Professor of Education. Bloland was appointed chair of the Department of Counseling at USC in 1973, taught courses in counseling psychol­ogy and student affairs/development, and chaired some 60 dissertations in those fields. He retired on September 1, 1989 as Professor Emeritus.

Paul Bloland joined ACPA in 1950. He attended his first convention in 1951 at Chicago during the annual gathering of the Council of Guidance and Personnel Associations. He and a colleague (friend) rode the train from Minneapolis. At the Chicago convention in 1955, Bloland was a discussant at a section meeting called Relationship between Personnel Facilities and the Activities Program on Monday afternoon, April 4. At the St. Louis convention in 1958, he presided at a Tuesday afternoon, April 1 session titled “Workshop: Fraternity-Sorority Rush Practices.” At the Philadelphia convention in 1960, Bloland read a paper, “The Role of the Student Group Advi­sor,” at one of the sec­tion meetings.

He was appointed to the ACPA convention Program Committee during 1960-61. At the Denver convention on Thursday morning, March 30, 1961, he presided at a section meeting titled Preparing Student Organizations for Financial Responsibil­ity. On Thursday morning, April 19, 1962 at the Chicago convention, Bloland presided at a section meeting on the Trend of Student Reaction Against Organized Campus Activities.

In 1964, Paul Bloland was appointed chairman of the ACPA National Membership Committee after serv­ing as Iowa state membership chairman since 1962. At the San Francisco convention, he participated in the two days of Executive Council meetings preceding the annual program. On the morning of the second day, Sunday, March 22, 1964, as ACPA representative on the APGA committee which developed the present branch structure, he reported on a plan adopted in principle for divisional organization at the state level under APGA charter. He reported for the outgoing membership chairman at that Sunday meeting again at the business session on Monday afternoon. Monday night at the Fairmont Hotel, he presided at a session for ACPA membership chairs. On Wednesday night, he participated on the program called APGA Commit­tee on Branch Coordination— Progress Report, again at the Fairmont Hotel.

At the Executive Council meeting on Sunday, April 11 and at the Business session Monday afternoon at the 1965 Minneapolis convention, Bloland reported that ACPA Membership totals were beyond expected goals. He was appointed a member-at-large to the Executive Council (1965-66) by that group to replace another member. At the Executive Council meeting on Thursday, April 15 attended by Bloland, President Ralph Berdie announced that Bloland would continue as Membership Committee chair during 1965-66. Bloland read a paper at one of the convention pro­grams on “Emerging Patterns in the Staffing of Stu­dent Activity Programs” and was a panel member on the Berkeley Demonstrations and Their Resolution.

When the ACPA Executive Council members met at the Washington Hilton Hotel on Saturday, April 2 for the convention in Washington, DC Bloland gave the Membership Committee report. He attended the Ex­ecutive Council meeting on Sunday and the Business session on Monday, when he presented the annual report on membership. During 1966-67, Bloland was ACPA representative to COSPA. Early in 1967, Blol­and authored ACPA monograph #8, Student Group Advising in Higher Education.

In the 1967 ACPA election, Bloland was voted one of three members-at-large to the Executive Council for the three-year term. At the Executive Council meeting on Thursday morning, March 23 he was appointed to work with a major ACPA project, Regional Workshops, which later evolved into the Continuing Education Program.

At the one-day Executive Council meeting in St. Louis on December 9, 1968, Bloland presented a favorable report of regional workshops on the theme of Student Personnel Work and Response to Cultural Difference. At the Sunday afternoon, March 30, 1969 Executive Council meeting in Las Vegas, Bloland’s motion that ACPA establish and charter state divi­sions throughout the country as rapidly as feasible was approved. He later participated in the formation of both the California Personnel and Guidance Associa­tion and the California College Personnel Association.

President-elect Bloland attended the meetings of the APGA Board of Directors on June 12-13, 1969 in Washington, DC. He was present for the mid-year ACPA Executive Council meetings on Saturday and Sunday, November 8-9 in St. Louis. On Saturday night, when the Executive Council task force commit­tee reports were given, Bloland spoke as chairman on the Resolutions and Convention Task Force Commit­tee. In a letter dated May 21, 1969, Bloland wrote to President Richard Nixon on behalf of the ACPA urging him to “devise a cease fire in Vietnam and Laos immediately and support a policy of self-determina­tion for the peoples of that area….”

At the 1970 ACPA conference in St. Louis, Bloland was involved in the Executive Council meetings on Saturday and Sunday, March 14-15. At the brief Monday afternoon Business session, Bloland intro­duced two resolutions (which were passed) submitted from Commission V, Financial Aids. He presided at the ACPA Executive Council meeting Thursday morning, March 19 during which his procedures on ACPA position papers were adopted. Near the end of the meeting, expressions of congratulation and apprecia­tion were extended to outgoing President Charles L. Lewis by the Executive Council on behalf of ACPA. On May 10, 1970, following the Kent State incident, he issued an appeal to the fifty state governors to forbid National Guard units from taking live ammunition onto campuses. On September 29, 1970, President Bloland forwarded a motion to the Secretary of Labor, the heads national labor unions, and presidents of high education professional associations calling for integrated work forces to be employed in all present and future campus construction. Bloland commis­sioned a position paper on the President’s Commis­sion on Student Unrest (the Scranton Commission) which was delivered to the association by the chair, Clive Grafton, in December of 1970. After Executive Council action, Bloland wrote to President Nixon and Governor Scranton in February of 1971 conveying the ACPA’s endorsement of the Scranton Commission’s report.

President Bloland attended meetings on Memorial Day weekend and Thursday through Saturday, Sep­tember 17-19 in Denver at the Hilton Airport Inn with the NASPA Executive Committee and NAWDC repre­sentatives to discuss possible merger and long-range cooperative programs. Appointive actions of his at the ACPA Executive Council meeting on Friday morning included a Journal Exchange Committee, a Long Range Planning Task Force Committee, and a Com­mittee on Joint Conventions. Bloland presided at the ACPA Executive Council meetings at Denver on Satur­day and Sunday, December 5-6, 1970. ACPA membership on March 1, 1971 was 7,133.

The forty-fourth annual ACPA convention was held in Atlantic City on Monday through Thursday, April 5-8, 1971, at the same time as the APGA convention. President Bloland presided at the Executive Council meetings on Saturday and Sunday, April 3-4 in The Tent of the Dennis Hotel. He called the Business session to order Monday evening in Shannon Hall of the Shelburne Hotel.

As immediate past president, Bloland served as ACPA’s representative to the APGA Board of Directors, as chair of ACPA’s Nominations and Elections Committee, and continued work with the ACPA task force on the re-conceptualizatlon of college student person­nel work (the Tomorrow’s Higher Education Project).

Subsequently, Bloland served on the editorial board of the Monograph Commission (1972-74) and as a member and reviewer on the editorial board of the Journal of College Student Personnel (Journal) during 1975-78. He was a member of the Directorate of Commission XII (1979-82) and liaison from Commis­sion XII to the APGA Professional Development and Consultation Committee in 1983. In 1980 President Cynthia Johnson appointed him to chair the ACPA Long Range Planning Committee which resulted in a major report in 1982 and a Journal article on the work of the Committee published in 1984. In 1988-89 he chaired the Annuit Coeptis Awards Committee having been elected a senior professional to Annuit Coeptis recipients in 1984 at the national convention in Bal­timore.

Bloland was very active during the 1970s and 1980s in the California College Personnel Association (CCPA) and served as state president of CCPA during 1981-82. In 1984 he was given the CCPA Distin­guished Service Award.

Bloland, also a well-known conservationist and mountaineer, died of cancer at his home in Rancho Palos Verdes, CA on November 19, 1998. An article in his memory appeared in the February 1999 issue of ACPA Developments.