During the Boston conference on Tuesday after­noon, February 28, 1928, Francis F. Bradshaw, Dean of Students at the University of North 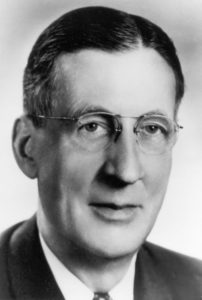 Carolina (since 1920), was elected president of NAAS at the annual Business session. He was in charge of vocational guidance and personnel work at Chapel Hill. Brad­shaw was 34 years old, married, and a father.

Born in South Carolina, Bradshaw attended the University of North Carolina in Chapel Hill where he received the A.B. degree in 1916. A graduate student there the next two years, he was also Secretary of the YMCA followed by 18 months of army service. Named Dean of Students at UNC in 1920, he assumed teaching responsibilities about 1925. His formal teaching was in the Department of Philosophy in which he taught courses in ethics.

Bradshaw enrolled in the Department of Psy­chology at Columbia University in the summer of 1925 through the academic year and summer of 1926 and received his A.M. degree (Psychology) that fall. At Columbia again during the summer of 1927, Brad­shaw was a summer school instructor there during 1928 and 1929. He was granted his Ph.D. degree in Psychology early in December 1930. His dissertation was entitled “The American Council on Education Rating Scale: its Reliability, Validity, and Use.”

Bradshaw first joined NAAS during the 1927-28 membership year. He was one of four people who spoke at the dinner attended by representatives of NAAS, PRF, and NCBO at the New York City confer­ence in January 1927. His topic was the personal interview from the standpoint of research. He pre­sided at one of the sessions at Boston in 1928.

NAAS officers considered carefully the question of expansion voiced at the annual meeting in Boston. Late in the fall of 1928, a group of persons who were officers of various organizations with somewhat similar interests met (without authorization from their members) in an effort to tie their organizations closer together geographically and try to correlate their annual conference problems. A result of that meeting was that a booklet of approximately forty pages was published by PRF. The title was “Cleveland Meetings on Personnel, Guidance, and Placement.” The folder contained the complete programs of the following six organizations for the 1929 conference: College Per­sonnel Officers of the Middle West (CPO), NAAS, NADW, NCBO, NVGA, and PRF. Open meetings and joint sessions were listed for Wednesday through Sat­urday, February 20-23, 1929, just preceding the meetings of the Department of Superintendence of NEA. Forty-six NAAS members registered at the sixth annual conference. The Allerton Hotel was conference headquarters. The program announced two general meetings sponsored by NAAS on Thursday, February 21. The theme of the morning meeting held in the Card Room of The Allerton Hotel was Problems of the Placement Office. The general topic of the NAAS general meeting that af­ternoon in the Ball Room of the same hotel was The Integration of College Personnel Work.

On Saturday morning, February 23, 1929, inter­ested people from all the collaborating associations attended a joint meeting arranged by PRF. The last topic discussed that morning was Co-ordination of Efforts of Organizations Interested in Personnel, Placement, and Guidance with Bradshaw making the last presentation. He stressed the importance of a merger of interests in planning annual programs for the benefit of all. Following his comments, a resolu­tion was introduced and seconded that each organi­zation designate a representative to cooperate and coordinate programs for the next year. The motion was passed unanimously.

Representatives from the six constituent organi­zations who planned the conference and other educa­tion groups met at a luncheon on Friday to discuss the experience of the Cleveland meetings and suggest possibilities for the following year when they would use a common plan and people authorized to corre­late program making earlier in the year. Bradshaw spoke of progress developing from interchange among the professional groups.

The NAAS annual Business session was held Thursday evening at The Allerton Hotel after an informal dinner. Bradshaw presided. He reported that the officers hired a stenotypist from Cleveland to record the sessions and make the verbatim report of the meetings possible. As during the preceding years, money from the institutional membership was to be used for printing costs of the annual report. Individ­ual members whose institutions were NAAS mem­bers received a copy of the annual proceedings free of charge. Others were to pay a price of not more than $2.00.

Bradshaw said that the NAAS name no longer covered the work responsibilities of its members. He suggested that the word “personnel” was more com­prehensive and included all the activities carried on by the members. Discussion focused upon three alternatives: (1) a change of name, (2) a change in the basis of membership, or (3) the name and member­ship to remain the same as before with one member appointed to cooperate in program planning with other associations. After vigorous but friendly dis­cussion, a motion was made and seconded that the name be changed from NAAS to NAPPO. The motion carried.

At the close of the Business session the chairman of the Nominating Committee recommended, and a unanimous ballot was cast, to have Bradshaw con­tinue as president during 1929-30. Membership through February 1929 totaled 96 individuals and 57 colleges.

ACE published the programs of ten cooperating organizations including NAPPO for the annual meet­ings scheduled for Thursday through Saturday, February 20-22, 1930 in Atlantic City. Sixty-eight NAPPO members registered at the seventh annual meeting.

At the Thursday morning session sponsored by NAPPO in the Chalfonte-Haddon Hall, the general topic was The Problem of Supply and Demand in the Teaching Field. For the Thursday afternoon session (a joint meeting with NVGA) the topic was Current Problems of the College Personnel and Placement Offices. The theme of the Friday morning (February 21) meeting was A Consideration of Various Aspects of Personnel and Placement Work. As during the previous year in Cleveland, a number of speakers presented and discussants responded on topics of both general and specific interests at each of the general session sponsored by NAPPO.

The Friday afternoon Business session of NAPPO members was held in the same room as the morning session. President Bradshaw presided. The Constitution Committee chair presented the new constitution item by item, and the constitution was adopted as amended. The revised purpose was ex­panded to include people whose work responsibilities in educational institutions at the college level con­sisted of any form of personnel work.

As the annual Business session drew to a close, members of the Nominating Committee recommended that Bradshaw be appointed on the NAPPO executive committee for the ensuing year.

The membership rolls indicated 105 individual and 53 college members as of February 1930.

A member of multiple professional associations with an emphasis in the field of educational and personnel administration, Bradshaw was one of the founders of the American Council of Guidance and Personnel Associations.

He resigned his position at UNC in December 1945 to enter private practice in industrial psychol­ogy in New York City. One of the organizers of Richardson, Bellows, Henry & Company, he became president. Bradshaw left that position in May 1959 but retained the office of Chairman of the Board for several years and served as a consultant.

Francis F. Bradshaw was 85 years old when he died in California. His interment was in North Caro­lina.