Robert B. Kamm became president-elect of ACPA early in 1956. He was the thirteenth man elected to ACPA’s highest office. When elected, 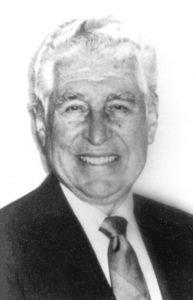 he was Dean, Basic Division and Student Personnel Services, Texas A & M. Kamm was 37 years old, married, and the father of two children, a boy and a girl.

Robert Kamm was born and reared in West Union, Iowa. He graduated from the local high school, valedic­torian of his senior class in 1936. That fall he entered the University of Northern Iowa with a four-year scholarship. He majored in English and Speech and received his B.A. degree in 1940. Prior to entry into World War II service in the U.S. Navy, he taught in the Belle Plaine, Iowa, public schools, 1940-42. In the summer of 1941 he began a master’s program at the University of Minnesota (UM). After his return from military service and intensive study, Kamm was awarded the M.A. degree (1946, Educational Psychol­ogy) at UM. He worked part-time at UM as a Research Assistant and Counselor in the General College, while he studied for his doctorate. C. Gilbert Wrenn was his Ph.D. (1948, Educational Psychology and Higher Education) adviser. Kamm’s dissertation was entitled “An Analysis of the Counseling Interview in Terms of Client Acceptance of Information Presented.”

At Drake University Robert Kamm was Dean of Students during 1948-55. After three years at Texas A & M (1955-58), where he began his move to enter academic administration, he accepted an appoint­ment at Oklahoma State University (OSU) as Dean of the College of Arts and Sciences, 1958-65, Vice Presi­dent for Academic Affairs, 1965-66, and President, 1966-77. On February 1, 1977 Robert Kamm became “University Professor and Past President, OSU,” with primary responsibility to teach higher education administration courses. In February 1982, the duties of “Director of OSU’s Centennial Histories Project” (a nine-year, 25-volume project) were added.

On January 1, 1988, Kamm officially retired and became “President Emeritus and Professor Emeritus, OSU.” He continues to direct the Centennial Histories Project, however, until its anticipated completion in 1991.

After he received his Ph.D. Kamm joined ACPA. His first appearance on the national convention program was in 1950 at Atlantic City. He was one of three panel members who spoke at a Wednesday morning, March 29 section meeting for those from middle-sized colleges and universities. The subject of the meeting was “Major Problems of Personnel Administration of Concern to All College Per­sonnel Workers.” At a general session later that day, he reported an illustrative study at a symposium titled “Problems of Evaluation in Student Personnel Work.” The topic of Kamm’s paper was “An Inventory of Student Reaction to Student Personnel Services.”

At the Chicago con­vention in 1951, Dean Kamm was discussion leader at an evening section meeting. Round-table discussion groups, limited to the first 25 people who arrived at the meeting place, discussed (without planned speeches) Some Bases for Promoting Professional Ethics Among Us, and the Communication of Such to Those in Other Profes­sions.

During 1952-53, Kamm was chairman of the Pro­fessional Standards Committee, which continued a study started by the preceding year’s committee. Kamm said that the committee’s concern was with the general subject of Standards of Selection for Folks Wishing to Do Graduate Work in the Student Person­nel Field. He and committee members planned to establish selection standards and distribute them to graduate institutions offering programs in student personnel work.

In 1953 at Chicago, the first national APGA conven­tion in which ACPA was a Division, Kamm was one of three discussants who spoke at a Monday afternoon, March 30 section meeting. The general topic was Evaluation of College Personnel Programs. The next afternoon, Kamm presided at the APGA section meet­ing labeled Professional Ethics- Problems and Proce­dures.

During 1953-54, the year he was ACPA Delegate to the APGA Assembly, Dean Kamm chaired the APGA Committee on Professional Practices and the Commis­sion on Program and Practices Evaluation of NASPA. At the Buffalo convention in 1954, Kamm presided at the ACPA section meeting early Wednesday afternoon. The general subject of the symposium of three speakers (besides himself) was Professional Ethics of Col­lege Personnel Workers. At the Chicago convention in 1955, Kamm presided at the ACPA College Section meeting Tuesday afternoon, April 5, at which time discussions focused on The Metropolitan or Urban College or University (under 3,000 students). At a section meeting on Approaches to Student Personnel Program Evaluation and Appraisal on Wednesday evening, April 6, Kamm read a paper titled “Evaluation Aids.”

Kamm left Drake University to become Dean of Student Personnel Services at Texas A & M, during the summer of 1955. The newly-created position included responsibility for virtually all of student life outside the classroom.

During 1955-56, Kamm chaired the ACPA Budget Committee. At the 1956 ACPA convention in Washing­ton, DC on Tuesday afternoon, March 27, he was discussion leader of a Personnel Administration group who focused their talks upon the subject of the morning general session, The General Role of the Interdisciplinary Faculty member. At the ACPA Ex­ecutive Council meeting on Thursday afternoon, March 29, a motion carried that APGA be instructed to count the election ballots and submit the tally to the ACPA secretary-treasurer and the chairman of the ACPA Nominating Committee. When the election results were tabulated, Kamm was listed as ACPA president­-elect for 1956-57.

In 1956, Kamm became Dean of the Basic Division and Student Personnel Services at Texas A & M. During 1956-57, he served as a member-at-large on the ACPA Executive Council, and he was ACPA liaison representative to the Commission on Educational Organizations, National Conference of Christians and Jews (NCCJ). He was hopeful that he could report to ACPA on the results of the Texas Grass Roots Confer­ence held at Austin early in 1957.

Robert B. Kamm was the first of three consultants to the 1957 Summer Workshop on Student Personnel Work in Higher Education conducted at Florida State University from June 18 to July 5. ACPA membership as of September 30, 1957, was 1,524. ACPA’s applica­tion for “constituent” membership in ACE was approved in Washington, DC on October 9. (ACPA was an “associate” member of ACE from May 1938 to June 1952.) Kamm was one of the six pre-named ACPA delegates who attended the ACE meetings on Thursday and Friday, October 10-11. He met early in October with the ACPA president-elect and other members of the Executive Council. As of February 1958, ACPA membership was 1,709.

The 1958 national APGA convention was held in St. Louis, Sunday through Thursday, March 30-April 3. The theme of the overall convention was “The Individ­ual in a Changing Culture.” The ACPA program con­sisted of 53 sessions with no attempts to differentiate between general and special interest. Also, three Executive Council meetings on Sunday and Tuesday and the Business sessions on Monday and Wednes­day were held. (He relinquished the chair to President-elect Northrup during the last part of the second Business session.)

President Kamm presented plaques to 14 past presidents of ACPA at the luncheon in the Statler Hotel Ballroom on Monday, March 31. Those past-presi­dents whose leadership and service were recognized were: Cameron, Bradshaw, Walters, Lloyd-Jones, Brumbaugh, Voorhees, Williamson, Feder, Wrenn, Hopkins, Anderson, Pepinsky, and Blaesser. After the presentation, Kamm delivered his presidential ad­dress, “Focus in a Time of Change.”

Kamm was one of the four ACPA members who met in joint professional organization meetings with repre­sentatives from NADWC, AACRAO, NASPA, and WPI on March 31, April 1 and 2 to discuss cooperative projects with no consideration given to inter-organiza­tional federation of any type. Near the close of the last meeting, Kamm was appointed unanimously as “Coordinator.”

Involved in international activities, he traveled in 42 nations and worked with people from some 150 different nations of the world. OSU was the first American university to enter into a contract with a developing nation. His higher education positions and personal interests kept Kamm extremely active at the national, regional, state, and local levels as well, primarily, however, he considered himself a “stay at home” administrator at OSU. Students always remained the “first love” of Robert Kamm and his wife.

Robert Kamm was the author of 70 journal articles and 3 books. He was the recipient of alumni achievement awards from the University of Northern Iowa, the University of Minnesota, and the Oklahoma State University. His recognitions are numerous and include an honorary Doctor of Humanities degree from Oklahoma Christian College.

After retiring, Robert Kamm and his wife, the former Maxine Moen, lived in Stillwater. Kamm, who served as OSU president from 1966 to 1977, died Oct. 10, 2008, at the age of 89. Ceremonies to recognize the life of Dr. Robert B. Kamm, the 13th president of Oklahoma State University, were held in Stillwater. Their children, Susan and Steven, both of whom are married, have children, and are serving in higher education.