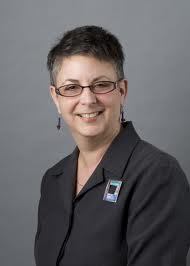 Dr. Heidi Levine (she/her/hers) is currently the Vice President of Student Development & Planning at Simpson College (Iowa); she previously served as Dean of Students at Cornell College in Mt. Vernon, Iowa while ACPA President. Prior to Simpson and Cornell Colleges, Heidi was the director of Student Health and Counseling at the State University of New York College at Geneseo; prior positions she has held include Associate/Interim Director of the Center for Counseling and Student Development (Radford University), Director of Counseling Services and New Student Orientation (Cabrini College), Director and staff member of Counseling, Academic Support services and Orientation (Philadelphia College of Textiles and Science [now Philadelphia University]), and Resident Director (College of New Rochelle).

Levine attended her first ACPA convention during her senior year at Northern Illinois University, many years before the creation of the NextGen program! Dr. Levine received her M.S. in counselor education (student personnel services) from the Pennsylvania State University; she earned her Ph.D. in counseling psychology from Temple University.

ACPA has been Levine’s professional home throughout her career. She considers ACPA to be an outstanding place to find a balance of focused professional development and research that addresses the functional areas of student affairs through a social justice lens. Early in her career Heidi became connected to ACPA’s Commission for Counseling and Psychological Services, serving as a directorate member and Commission chair. Prior to becoming ACPA Vice President in 2010 Levine also served as Director of Commissions and editor of Developments.

During her year as ACPA Vice President Dr. Levine served as a member of the  leadership team which developed a proposal to consolidate NASPA and ACPA. Shortly after Levine began her  term as President the membership votes concluded, leaving ACPA and NASPA to continue as separate associations. Levine described her role as President at that time as helping ACPA remain focused on how best to maintain and build on its distinct identity and robust, vibrant presence in a competitive association environment.

Now, many years later, Levine believes her biggest accomplishment as President was helping ACPA thrive through and beyond this challenging time. Levine describes her time as ACPA President to be one of the highest honors of her professional life. As ACPA is a home to Levine, she is deeply touched that members trusted their professional home with her. Dr. Levine still finds power in the words of Van Jones, the opening keynote speaker of the 2012 (Louisville) Convention, during which he described student affairs professionals as the “holders of the ladder” by which young adults, including those who have been most at-risk, climb to higher places in their lives. Levine considers it to be such a privilege to be among those who hold the ladder for students to climb.

Levine believes the work of ACPA continues to matter tremendously. “ACPA has always held the value of lifting up and developing the whole individual to grow and thrive in all aspects of their identities.” Levine considers it to be a very challenging time to work in higher education in the face of increasing needs and expectations but decreasing financial support. In its continued focus on research which deepens our understandings of students and their learning, career-spanning professional development, and call to critically examine our own work through a lens which calls us bring to fruition our longstanding commitments to inclusion, ACPA remains a leader in advancing student affairs and higher education.

Levine’s leadership and engagement with ACPA has not ceased. She is an ACPA Foundation Trustee and is serving in her second term as Foundation Vice President.