At the age of 28 and still a bachelor, Robert K. Speer was elected president at the annual NAAS Business session In New York City on 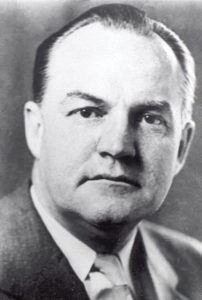 January 22, 1927. He was the first man to be elected NAAS president. He was Assistant Director of the Bureau of Educational Service at TC, a position he took in 1924, two years after he received his master’s degree from that institution.

Born in Peterboro, Ontario, Canada, Robert Speer’s family moved to Sault Ste. Marie when he was three years old and to Fort William when he was eight. He graduated from the Fort William Collegiate Insti­tute in 1914 and came to the United States where he was naturalized 10 years later. At Michigan State Normal College (now Eastern Michigan University, Ypsilanti), Speer completed his graded teaching cer­tificate course in August 1915. He was an elementary school Principal in Moreville during 1915-16 and Teacher at the high school in Minden City from 1916-18.

In the military service during World War I, Speer was a Corporal when discharged. He returned to Eastern Michigan and completed his life teaching certificate in the spring of 1920 and received the A.B. degree in June 1921. That fall he enrolled for a master’s degree at Teachers College, Columbia Uni­versity (TC) where he received the M.A. (1922, Educa­tional Administration) and TC Diploma (Superinten­dent of Schools). During 1922-23 Speer served the Cleveland (Ohio) schools as Assistant Director, Re­search Department, followed by a year as Principal of the elementary and junior high school in Montclair, New Jersey. Assistant Director of the Bureau of Educational Service at TC until 1928, he was granted the Ph.D. degree the following year (1929, Admini­stration). The title of his dissertation was “Measure­ment of Appreciation in Poetry, Prose, and Art, and Studies in Appreciation.”

Prior to his election to the presidency, he served as NAAS vice-president from 1925-27. During the 1926 conference in Washington, DC, Speer presented a report of research studies in the field of appoint­ment which was published in the annual proceed­ings. During open discussion on the second morning of the 1927 conference in New York City when he described methods used in determining the qualifica­tions of teacher candidates, he said that he allowed registrants to choose their own references but he reserved the right to inquire about them of other teachers. During the summer of 1927, Robert K. Speer was an Instructor at TC.

As of February 24, 1928, several days before the annual conference, 86 individual and 45 college (institutional) names appeared on the NAAS membership rolls.

The fifth annual con­ference took place In Boston, again in conjunc­tion with the NCBO and PRF organizations. Dur­ing the three-day confer­ence, Monday through Wednesday, February 27-29, 1928, NAAS met at the same time as the NADW and the Department of Superintendence of NEA. Forty-six members registered. The theme of the program of meetings was “Personnel Adjustment Problems of the Individual Student.”

Five general sessions were presented. Two sessions were scheduled for Monday and Wednesday, one each in the mornings and afternoon. No evening meetings were planned so that NAAS members would have time to attend sessions of NEA organizations.

The first general session was held in conjunction with the NADW at the Copley-Plaza Hotel on Monday morning, February 27. The other sessions of NAAS were held In the Assembly Hall in the College of Practical Arts and Letters, Boston University. At the afternoon joint meeting with the NCBO and PRF groups, two speakers made presentations. Each speech was followed by dis­cussion among those in the audience. At the general session Tuesday morning, February 28, President Speer presided. Prepared reports were given by the five pre­senters on the subject of research. The first talk was titled “Human Engineering in Industry,” followed by a presentation called “A Study of the Relation Between College Scholastic Standing, College Activities, Psycho­logical Tests, and Position, and Salaries of College Men After Graduation.” Donald Sneddon of Harvard Univer­sity spoke on “Measuring Intelligence through the Inter­view,” and another study was titled “A New Type Letter of Recommendation for Teachers.” The fifth report pre­sented by a psychologist was labeled “Vocational Stabil­ity of the Oberlin Alumni.”

The fourth general session was held Wednesday morning, February 29. The NAAS was vice-president presided. The general topic for discussion by three presenters was “What the Employer Thinks of the College Graduate.” Discussion bearing on the various topics presented was postponed until the close of the meeting. The first speaker spoke on “Employment: The Acid Test of the College Degree.” The next speaker’s topic was “How the College Graduate Acquires Efficient Work Habits.” The third gentleman presented a paper titled “The Part Which Colleges Play in Developing Business Leaders.” Much discussion followed.

The fifth and last general session of the conference held in the Assembly Hall at Boston University took place that afternoon. W.V. Bingham, Director of PRF, presided at the Wednesday afternoon meeting. He said that the topic for consideration was Personnel Methods on the Collegiate Level. He introduced D.A. Robertson of ACE who talked about the progress made by several subcommittees of the ACE Committee on Personnel Methods. The second speaker talked about “Symptoms the Interviewer Should Watch for in Order to Know When to Call on the Psychiatrist.”

Speer presided at the annual Business session held Tuesday afternoon. Because NAAS members who found selected speeches that were printed on the annual reports of three prior conferences to be useful in their work, those in attendance at the Business meeting voted to publish in greater detail the proceedings of the Boston meetings. Money derived from college member­ship fees was to be used for that purpose. Also, some people suggested that a monthly or quarterly bulletin be published. President Speer said that he thought NAAS ought to consider the possibility of forming an organiza­tion that would include all those people from a number of functions which involve college personnel work, rather than the appointment officers only.

Since the “personnel idea” was becoming more prevalent in colleges and universities at that time, the NAAS group, he thought, was in a good position to help pioneer in a growing movement. Speer commented that several organizations who were interested in personnel work tended to overlap too much in their organizational planning. The formation of a large association with a wide variety of work responsibilities and interests dis­tributed among the members, he said, would help bring the organizations together by means of general group sessions and specialized sectional meetings. Speer commented that NAAS plans of this kind would make a significant contribution to professional organization at the college level. He said that the NAAS Program Com­mittee purposely arranged the Boston meetings as a joint program so that it would not be possible to know which organization was sponsoring any particular meeting.

Several months after he left the presidency of NAAS, Speer began his professional career of 31 years at New York University (NYU) as Assistant Professor of Educa­tion (1928-29), Associate Professor (1929-30), and Professor (1930-59). Also in 1930 he was appointed to chair the Department of Elementary Education. He joined the Division of Advanced Study in 1952. When it was disbanded five years later, he became a member of the NYU Department of Administration and Supervi­sion.

Known as an expert in elementary school admini­stration and co-author of six books, Robert K. Speer died two days before his 61st birthday. He was survived by his widow, Alice, a son, a daughter, a stepson, a sister, and two brothers.